Precious grazing wiped out in hours, with no end in sight 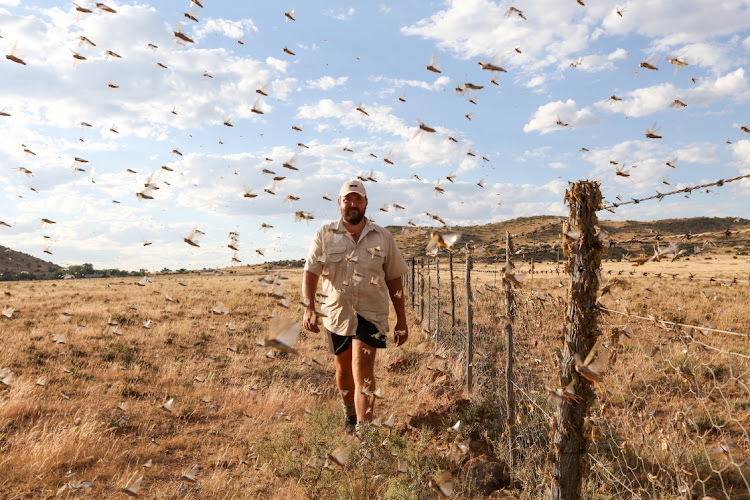 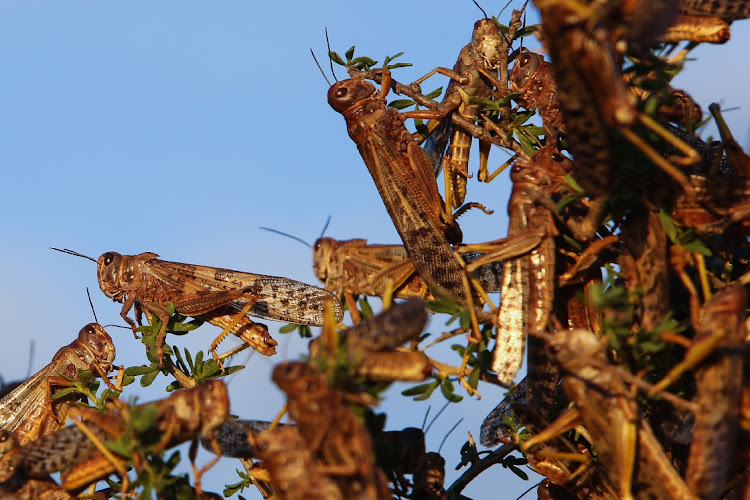 For three months, Jannie Louw watched over the crops that would have fed his 15 stud merino rams for a month.

This week, the Sterkfontein farmer looked on helplessly as his fields were wiped out in less than three hours by a swarm of voracious locusts.

“It looks like I’ve planted nothing here. The veld was green three days ago and there is nothing left now,” said Louw, 36, on his farm in the Middelburg district..

Louw is one of many farmers under siege from the massive swarms of brown locusts wreaking havoc in the Karoo.

Areas around Graaff-Reinet, Cradock and Middelburg have been plagued by flying swarms since the start of this month, and farmers are unsure when the disaster will end.

Billions of locusts fly in swarms so dense they sometimes block out the sun and when they land, their collective weight can break tree branches.

Crop and pest control experts predict it will only get worse if the current swarms are not controlled.

The next swarms are expected to arrive in September.

The adult locusts are mating and laying eggs, and should conditions be favourable for them to hatch, the country’s main crop-producing regions could be under threat.

Walking among the swarms by day is eerie. There is a constant “chatter” as the male locusts rub their wings against their hind legs to attract females.

Strangely, despite being surrounded by a constant wave of flying insects, they rarely fly into people.

But drive through them, and your next stop better be the nearest car wash. Some drivers have even reported cars overheating with the huge numbers of locusts stuck in their grills and radiators.

In the evening, when they land to rest, farmers measure the swarm sizes by the amount of land they cover, and swarms as big as 450ha have been recorded in recent weeks.

You cannot walk five paces without crushing dozens of the sleeping insects. 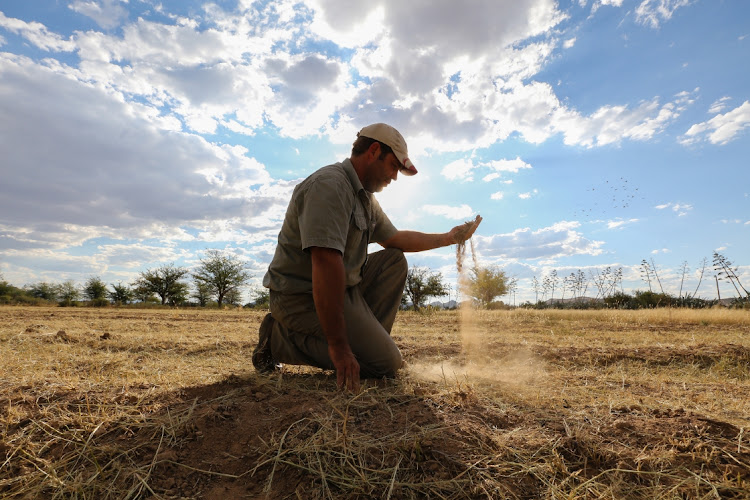 GRAZING DESTROYED: Massive swarms of locusts have decimated the grazing Jannie Louw cultivated to feed the livestock on his farm
Image: Werner Hills

Louw said: “I grew up on this farm, and I have seen locust swarms come through here three times in my life, but none as intense as this. The destruction is incredible.”

He has also seen immeasurable damage done to his natural veld.

Initial poison and control operations started in September when the first swarms of young locusts were noticed.

In the early stages of their lifespan, locusts are known as “walkers” because they have not yet developed wings. That makes spraying them with insecticides much easier, and control operations can take place any time of the day.

However, as they mature and shed their skin, they develop the ability to fly, landing only to eat and rest.

These swarms of flying locusts can easily travel 80km in one day, depending on wind conditions. This makes spraying them with poison challenging as it can only be done at night, or in the early hours of the morning.

Christoff Vermeulen, co-ordinator for the locust control team in the Middelburg district, said their team consisted of five farmers, contracted by the government, who sprayed fields as reported by the affected farmers.

“Each district has its own team, so we service farms that fall under the Middelburg district. The equipment and poison are provided by the department of agriculture and we distribute it among our team members,” Vermeulen said. 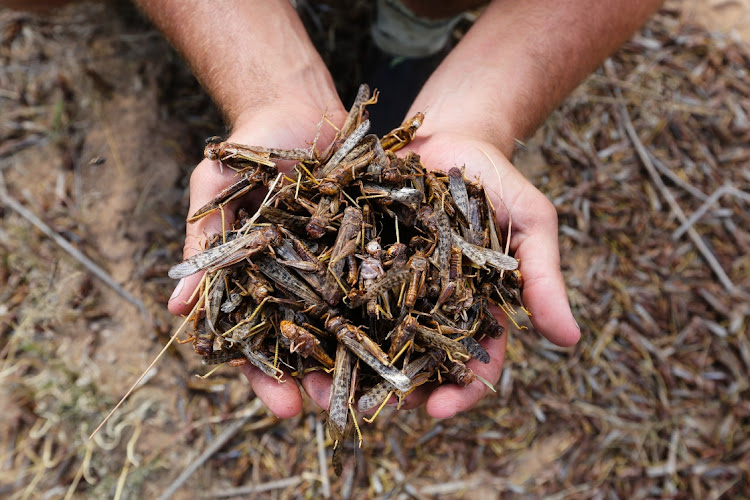 DEADLOCK: CJ Fouche, manager at the farm Bangor, near Middelburg, picks up some of the huge number of dead locusts after he sprayed insecticide on the farm
Image: Werner Hills

The active ingredient in the poison is known as Esfenvalerate which has been developed specifically to control brown locusts.

A sprayer, similar to a large leaf blower, is attached to the back of a bakkie and creates a cloud of poisonous vapour that settles on the locusts as they sleep.

The concentration of the poison is too low to be harmful to larger animals and the dead locusts are safe for consumption by any animals that may eat them.

In fact, the insect carcasses are a good source of protein and many farmers have seen their sheep eat the dead insects. They can also be worked into the soil to provide nutrients for crops.

“Every evening we look at the reports that have come in and identify the areas we believe our sprayers could have the biggest impact,” Vermeulen said.

According to Vermeulen, the current swarms hatched in the Northern Cape and spread in different directions when they reached maturity. Locust swarms have been reported as far as Namibia.

“These swarms are massive, not only in the areas they cover, but in the actual amount of locusts as well.

“We have seen reports stating that you can have up to 150,000 locusts per square metre once they have landed. Now picture one hectare of that, and we have seen swarms as big as 450ha. Now imagine all of that up in the air.

“You cannot imagine it unless you have seen it with your own eyes,” he said.

One of the farmers on Vermeulen’s team, CJ Fouche, said he had used more than 400 litres of poison in the past week, but the billions of dead locusts on the ground were not even a fraction of the swarms still active in the area.

“Some of us get up at 3am to prepare our equipment, drive long distances to the farms that need help, and by 6am we start spraying.

“You get home, you have lunch, you refuel and refill the sprayer, and by 4pm you leave for the next farm that needs spraying. Sometimes you only get home around 11pm. And the next morning you repeat the same routine,” Fouche said.

Areas around Graaff-Reinet, Cradock and Middelburg have been plagued by flying swarms since the start of this month, and farmers are unsure when this disaster will end. Billions of locusts fly in swarms so dense it sometimes blocks out the sun, and when they land their weight bends tree branches to the point of breaking.

On Skoongesig Farm, Strydom Schoonraad said the area had faced one disaster after another, and the locusts needed to be stopped as soon as possible.

“In 2017 we suffered major damage due to a hailstorm. Then the drought had us on our knees. Now, to top it all, the locusts are eating what little grazing we have been able to grow after the drought.

“I am extremely grateful for the teams working so hard to try to control these swarms. We have had many factors play against us and we want to conserve the little we still have left. The action taken by the control teams are crucial.”

Spokesperson for the department of agriculture, land reform and rural development, Reggie Ngcobo, confirmed that the department had appointed locust control contractors and provided them with insecticide, spray pumps and protective clothing to deal with the locust swarms.

“On top of that, the department appointed a helicopter service provider to assist with aerial spraying of the outbreak to supplement the ground control teams to ensure that the outbreak is controlled, especially in inaccessible areas,” Ngcobo said.

He said four provinces were affected by the swarms: the Free State, Eastern Cape, Northern Cape and Western Cape. 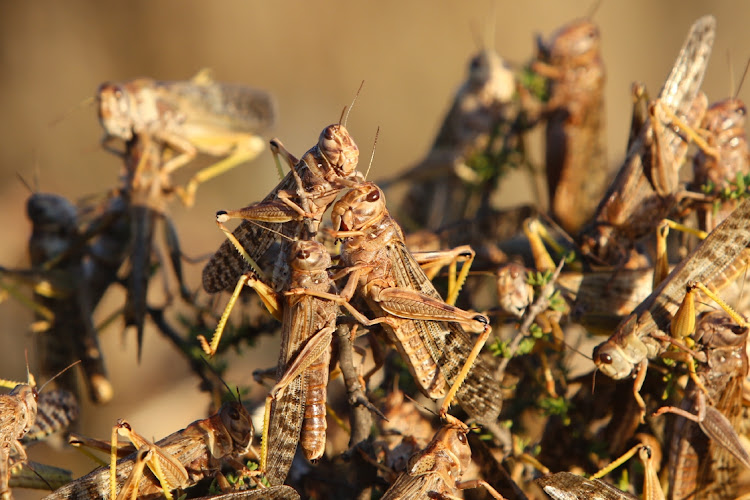 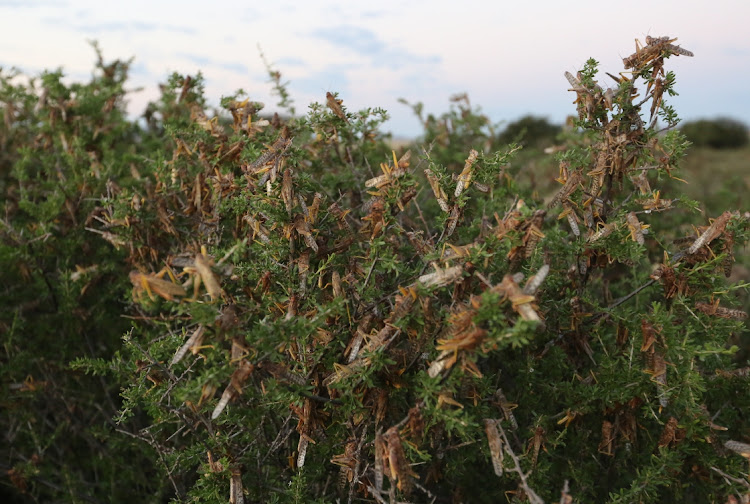 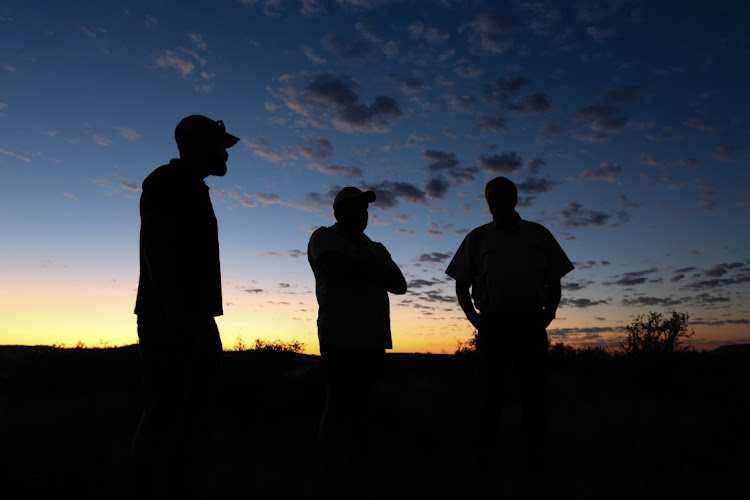 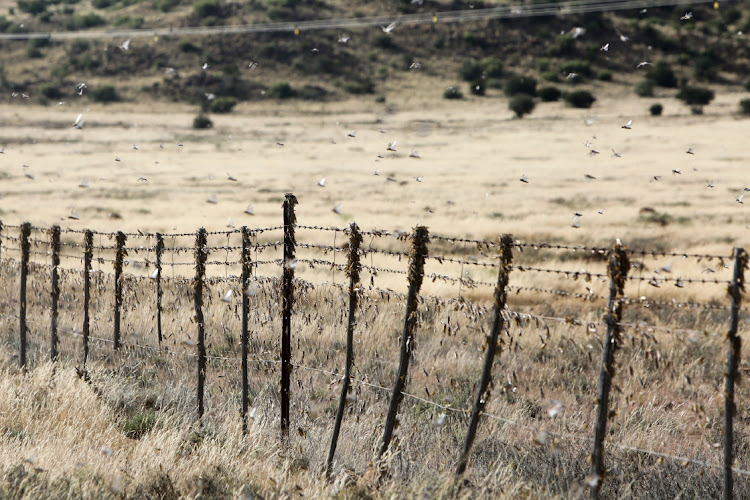 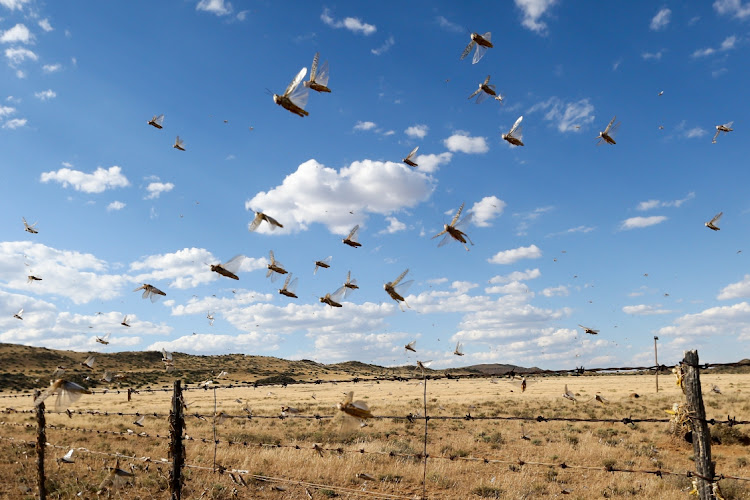