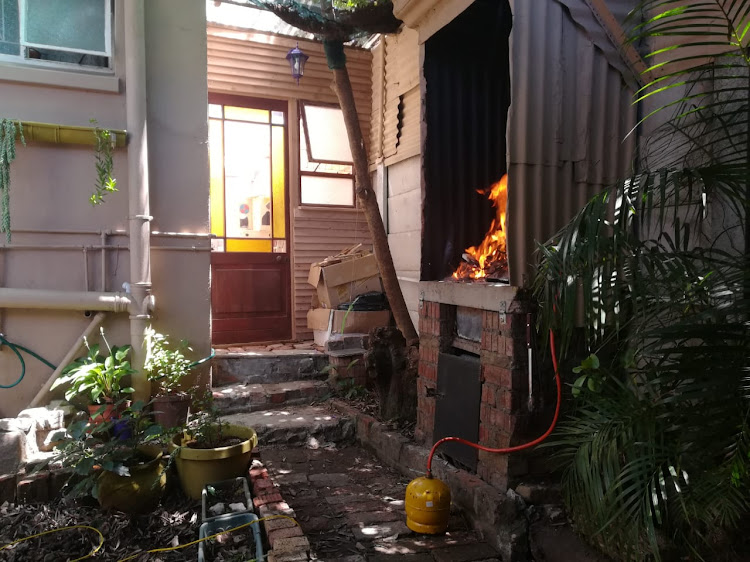 PERFECT WIND-BREAKER: This greenhouse was built across the end of an alleyway that runs down the side of the house.
Image: Christina Engela

Our home is one of those long, narrow semi-detached houses in Richmond Hill, which have modest ( small) backyards and narrow side alleys between them.

One end of our alley offered the perfect opportunity to construct an enclosed space — all I had to do was put roof beams and plates between my side of the   boundary wall and the house, and then put up partitions and doors on either side.

I began this project in 2014, when I elevated the floor by covering it with building debris as landfill between two low walls I’d built across that end of the alley. I had always thought it would make a lovely stoop for outdoor breakfasts and such, but later changed my mind and decided it would make a more useful sunroom or greenhouse.

Either way, making it was fairly simple. And if you do it the way I did, using off-cast materials, it could work out quite cheaply as well.

I had luckily acquired quite a bit of imitation wood decking some years back, and I decided to use some of the beams to build the outer partition frame, because of its resistance to rot.

I built the frame, measuring the opening of the door and height of the roof. I wanted that end of the roof to be lower than the other to deflect the wind because the alleyway had always been a wind-tunnel.

After securing the framework to both sidewalls with rawl bolts, I built the door frame. Then I covered the outside surface with white PVC IBR roof sheets which I bought second-hand from a friend.

Then it was time to plan the angle of the roof and  place the roof beams. This isn’t as simple as it sounds, but if you keep your head and think things through before actually lifting a tool, you can save yourself lots of trouble and expense.

I started from the lowest point of the roof, rising to the other end, which still had no partition. I did that last, building it underneath the roof.

I placed the highest roof beam at the corner of the house and end of the alleyway, securing it to the walls with galvanised steel beam brackets and rawl bolts, as were the two centre beams.

I installed a length of gutter on the lower end, and connected a PVC pipe to divert rainwater to the garden.

Then I bought a few PVC IBR clear roof sheets from Builder’s. As it turned out, I ended up with a slight bulge, which really didn’t hurt, so I left it.

As it was a future greenhouse,  I needed to create a second partition at the back with a door, and window I fitted a small plastic vent to the first partition to allow for air to flow.

In 2018 I bought a few roof beams from Builder’s to make the frame for the partition, as I’d run out of plastic wood by then. I decided to locate the partition about 1m back from the end of the house so there would be some overhang to protect the wood from direct exposure to rain. This would also create a small veranda.

The frame was easy enough to build and secure to the walls. I had an old door I decided to use for this project, and once I’d mounted it to the door post, it was easy to position the other door posts and secure those in place.

I scratched in my parts bins for an old door lock, which came from one of our original outbuilding doors and is probably around eighty years old!

I found an old wooden window frame at a nearby breaker’s yard in Kempston Road going cheap. It was fairly easy to mount inside the frame of the partition.

Next, I just needed to cover the outside. I used the slats of some old pallets, trimming them as necessary, and securing them in place with self-tapping chipboard screws.

I also placed them in an overlapping, clinker fashion which gives it a rather nice look.

After that, I covered the inside with pressboard panels and  a coat of paint. I fitted an interior light, porch light, and paved the little veranda with broken bricks.

It’s rustic, and but that’s the way we like our back garden.