NMB citizens laugh off threat as they go unmasked 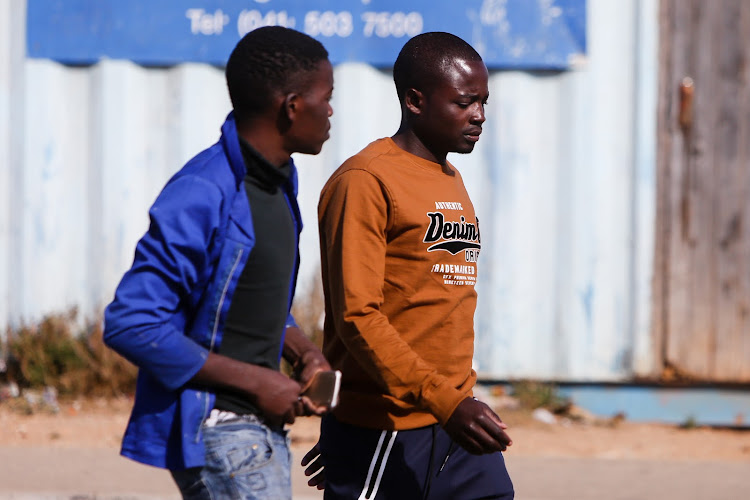 COVER UP: Nelson Mandela Bay residents have dropped their masks with the move to level two, claiming they are an irritation or the weather is too hot to don the protective wear. Among them are these men in Tyinira Street in Motherwell
Image: Werner Hill

This has become the new normal in Nelson Mandela Bay as residents treat level two as level zero, with thousands of people in the city disregarding one of the best and easiest ways to combat Covid-19.

Over seven days, starting on Tuesday August 18 when level two kicked in, Weekend Post counted those without masks in 12 different spots about the city.

In almost every corner of the city, dozens, if not hundreds, of people went about their business unmasked.

Mandy Frank, who has had two family members test positive for Covid-19, including her three-year-old daughter, said if the decision by people to not wear masks and to risk their own lives affected them alone, it would be a different story.

Instead, their actions risked the lives of those around them as well.

Weekend Post counted 1,446 people around the city without masks, with the highest number coming from Motherwell, which has repeatedly been singled out as a Covid-19 hotspot with 2,663 confirmed cases as of Monday.

The areas with the highest prevalence of people not wearing masks were Motherwell, Zwide, Walmer and the Port Elizabeth beachfront.

Some of these areas, have the highest confirmed Covid-19 cases in the city.

Weekend Post asked a number of people why they weren’t masked. The answers were similar — a hassle, too hot, makes you sick or left at home by mistake.

It is not a criminal offence to be unmasked when walking on the street or beach, though it is strongly recommended by doctors and scientists around the world that you always wear protective gear when leaving your house.

However, it is mandatory when entering a shop, office or travelling in a taxi, where the owners can be prosecuted under the revised lockdown regulations.

Eastern Cape police spokesperson Brig Tembinkosi Kinana said no fine had been issued to a person not wearing a face mask in the province.

He said failure to wear a mask was not against the law.

“But according to the law, a person who has not put on a face mask may not be allowed in a public place or use public transport.

“People are encouraged to wear their masks at all times.” he said.

Dr Bongani Mooi, a general practitioner specialist who has a keen interest in preventive medicine, said research had shown that wearing a mask was one of the strongest defences against the virus.

He said sometimes people should not wear a mask, including those exercising or children under the age of two, but there was no excuse to drop the safety measure.

“The public needs to get accustomed to wearing masks in public spaces,” he said.

“Imagine the windshield of a vehicle on a drive in SA. Picture all the insects that are shielded by the windscreen.

“Were it not for that shielding factor all the insects and stone chips from the tarred road would find end up striking our faces.”

He said one of the main features of wearing a mask was protecting others.

During a visit to Motherwell, 682 people were seen ignoring the advice of doctors and scientists.

One man, when asked why he refused to don a mask, said he was not afraid of the virus and that he had likely already been infected.

He was walking with a friend who was also not wearing a mask.

In a visit to Zwide, 200 people were counted without masks in Kenako Mall, with a car guard saying he no longer bothered to wear one.

A woman was spotted running into a nearby shop. Asked why she was not wearing a mask, she said: “I won’t catch the virus by just going to the shop quickly for food.”

In Walmer, dozens of people walk about without masks. Parents are seen dropping children off at schools with masks hanging about their necks.

In the blistering sun last Saturday, 129 people were seen walking along the Port Elizabeth beachfront without masks.

A father who was enjoying the sunshine with his children said it was just too hot to wear masks.

The lowest figures come from Lorraine and South End, but many cyclists were seen in both areas with masks hanging about their necks.

Ear, nose and throat surgeon Dr Cameron McIntosh said masks worked two-fold for people, protecting both themselves and others.

He said wearing a mask would not make you sick if kept clean and in a good condition.

He said social distancing was more favourable than mask-wearing and urged people exercising to ensure they kept a distance.