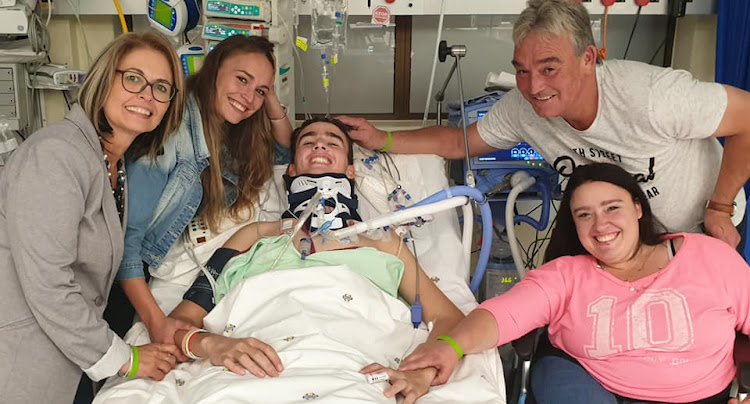 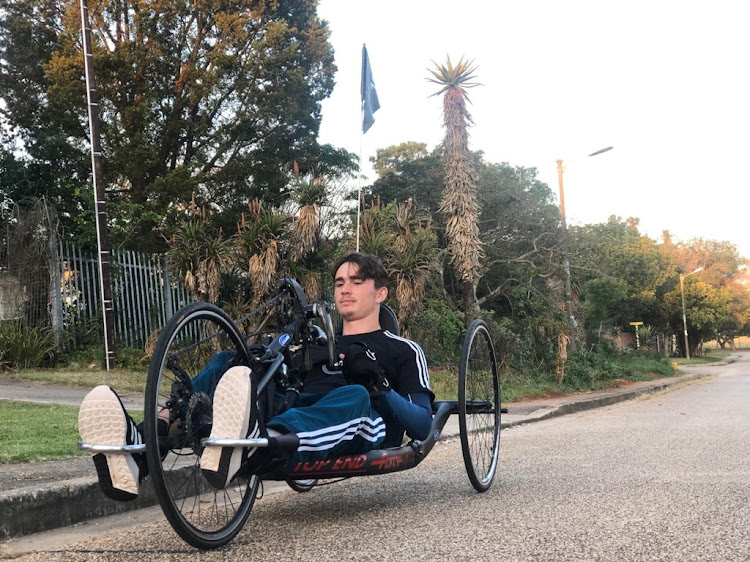 A year after a severe rugby injury changed the course of his life forever, Dano Swart returned to the field  where it happened — a visit that gave him some peace.

The Brandwag High School pupil suffered a severe neck injury during the EP high schools rugby trials at Framesby, leaving him with fractured neck vertebrae and no sensation in his upper and lower body.

Holding on to the belief that he will still regain hand and leg function, Dano has now returned to Brandwag to complete his matric year.

The accident initially forced him to put his studies on hold as the 19-year-old spent more than six months in hospital and at rehabilitation facility Aurora.

He has also undergone physical therapy at the Walking with Brandon Foundation in Cape Town.

After the accident, Dano was admitted to ICU for 10 weeks and later transferred to high care for two weeks before transferring to Aurora, where he finally spoke for the first time in about four months.

“When I got out of hospital and moved to Aurora, I still had a tube in my trachea, so I only spoke for the first time when it was removed weeks after I had been there,” Dano said.

The former cricket and rugby player returned home briefly in October where he was thrown a surprise party by friends and family before moving to Cape Town for his second round of therapy at the Walking with Brandon Foundation.

“It was really amazing to have my friends together for the first time since the accident, even though they caught me completely by surprise.

“I asked my sister to go to the matric farewell with me because she has stood by me throughout and I felt that she understood what I was going through,” he said.

He started his second phase of rehab in Cape Town in October and has since regained some sensation.

“I’ve really gotten so much better now and I can feel when someone touches me, which is positive thing because I wasn’t expected to ever regain sensation,” he said.

Dano returned to pursue matric this year but has been home since schools shut their doors in March as a Covid-19 safety precaution. He has had to take extra caution as he suffers from lung complications.

“I didn’t go to school when matric opened last week because I have lung problems but we have made arrangements with the school to ensure my safety and I’ll be returning to school on Monday, mask and all,” Dano said.

With limited body function, Dano’s family has organised a scribe to assist him.

The former rugby vice-captain said he was already considering another sport to support his changed life. His family recently bought him a recumbent hand bike.

“I’ve started practising on it and had my first session last week. It’s pretty tough but I will continue to practise until I get the hang of it and maybe go all the way to the Paralympics one day,” he said.

On May 6, a day before the anniversary of his accident, Dano visited the Framesby field where his life changed.

“The visit went better than I had expected and it has helped me find some peace and move forward. I have been feeling relieved since I visited the place and the support from everyone has helped me look at things positively,” he said.

Dano’s mother, Sanet Swart, said Dano’s outlook and mood had been positively affected since the visit to Framesby.

“We as his family are most concerned with supporting him, so his spirit and his mood is what determines how we feel.

“His emotions were up and down but he is definitely a lot stronger emotionally ever since he’s been to the field because I think he needed to find peace in his heart.

“He is not entirely accepting that this is how things will be forever, he still believes that God will make a way for him to gain [the] function of his hands and legs back, but he needs to do something while waiting for the miracle to happen and he’s been doing a lot exercises,” Sanet said.

Sanet said the family had channelled positive energy from kind messages sent by people from across the country through the Facebook page “Bid Vir Dano” (Pray for Dano).

The page was established by Sanet’s brother, Samuel Ferreira, shortly after his accident.

Ferreira has since been sharing updates on Dano’s condition and receiving messages of support from thousands of Facebook users.

“We have received a lot of emotional and financial support from many people and we are so grateful for the prayers.

“At some point I thought we should stop sending updates thinking that people were just bored from hearing about this, but people would actually reach out and be the ones asking for updates and praying for us. They still support us,” Sanet said.

Dano said he would return to the Walking With Brandon Foundation after finishing matric.

He wants to pursue a career in winemaking.