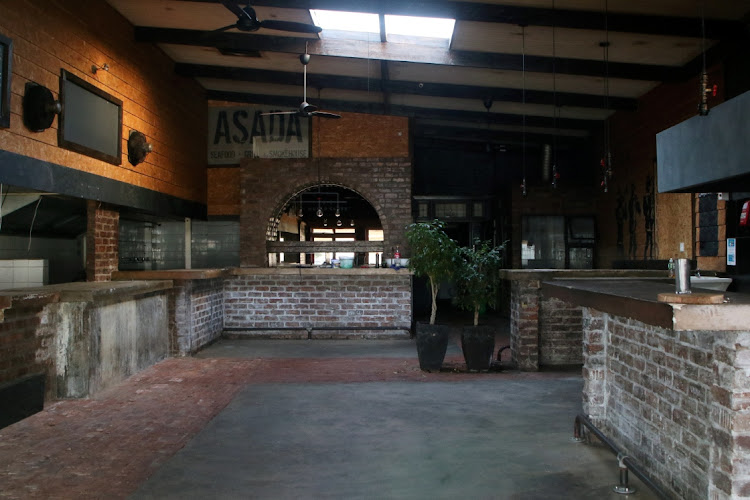 END OF AN ERA: Asada owner Mark Oosthuizen announced the eatery’s closure in May, and several other restaurants in once-vibrant Stanley Street and neighbouring Bain Street have followed suit
Image: THE HERALD/FREDLIN ADRIAAN

Once a trendy, bustling hub where foodies would congregate, Port Elizabeth’s Stanley Street is reeling as restaurants close for good because of the crippling national coronavirus lockdown.

At least five restaurants in the once-vibrant precinct are shutting up shop, with fears more will follow.

Though some business owners in Stanley Street and adjacent Bain Street say the restaurant industry in the area will never be same again, others are hopeful this is not the end of what was the heart of dining in Richmond Hill and beyond.

Asada on Stanley Street was among the first to close, with owner Mark Oosthuizen permanently shutting its doors in May.

Also closing shop are Two Olives, Flava on Bain Street, Bourbon on Bain and CJ’s on Stanley, on the corner of Stanley and Bain streets.

Flava owner John Burger, said the business had been feeling the pinch even before the hard lockdown because of the restricted hours and numbers implemented in the run-up to the measure. The ban on alcohol had worsened the situation, he said.

“When you run a relatively upmarket restaurant, you rely on upmarket food which gives you escalated markups.

“You serve people alcohol and food that is not designed around [the takeaway system] so we immediately had to restructure and bring cheaper items onto the takeaway menu and stop selling alcohol.

“Money was coming in but it wasn’t doing anything for us.

“It’s not easy to let go of a decade’s worth of hard work so I don’t take this decision lightly.

“The food industry is my life and I do believe I will start afresh,” he said.

On Friday morning, Burger was packing up and moving out of the building from which he had operated.

“I had to make the choice to keep one restaurant and let go of the other to minimise costs.

“Nolio is obviously still limited under current regulations but we are doing our best to keep it going by providing takeaways,” Gunston said.

He said he had faith that Stanley Street would recover.

“There are some of us who are staying and we trust that new restaurateurs will move in where other restaurants have closed.

“We are trying to be positive because if we have a  negative outlook, it will be our downfall,” he said.

Steve de Beer, owner of the Stanley on Bain building which houses Asada/Fushin, Bourbon and CJ’s on Stanley, among others, said it was not all doom and gloom and he saw the situation as the start of a different era.

“Change comes with a lot of uncertainty and fear but our minds remain open to new possibilities.

“We are open to exploring new options that may transform and extend this place to businesses that are not necessarily restaurants,” De Beer said.

Jack Goodwin, who owns the building that houses Two Olives, said: “The impact of the virus has been bad on both restaurants and landlords because we are all losing a lot of income.

“It’s unlikely the restaurant industry will survive this, especially in Port Elizabeth, but there are still possibilities for Stanley Street to accommodate other small businesses.”

Goodwin said the exit of the restaurants could result in the street losing the vibrancy for which it had become known.

“It wasn’t exactly the safest space to hang around before it became a restaurant hub and I think it might return to that,” he said.

Salt restaurant owner Etienne Barkhuysen said he had halted operations but would reopen when restrictions were more relaxed.

At the moment Salt and St James, his other restaurant in Walmer, were completely closed, with the option of selling takeaways not attractive, he said.

“I think Stanley Street is an awesome place that people like, and it will survive.

“I do expect that many people have taken a financial knock but we will all get back on our feet and where businesses have left, new ones will come in,” Barkhuysen said.

Upstairs owner Mark Phillips said he had not yet made a decision on the venue’s future.

“It’s very hard to stay when there are no profits coming in because we still do have a lot of expenses, but I haven’t made my final decision on how to move on from here.”

Phillips said he shared fears that Stanley Street would never be the same again.

“It's very unlikely it will return to its same format. I estimate at least 60% of the restaurants will close.

“It’s very hard to stay positive because the worst thing about uncertainty is that you can’t prepare for anything, but we will just hold thumbs for now,” he said.

Groundfloor owner Janey Nortje said her coffee shop had been kept afloat by regular customers since reopening for takeaways in May.

Though her business continues, Nortje expressed fear about the future of Stanley Street.

“I’ve been in the industry for more than two decades and I have witnessed some challenges, but they have never been this drastic and scary.

“It breaks my heart to watch people pack up and leave a community they have been a part of for so many years,” she said.