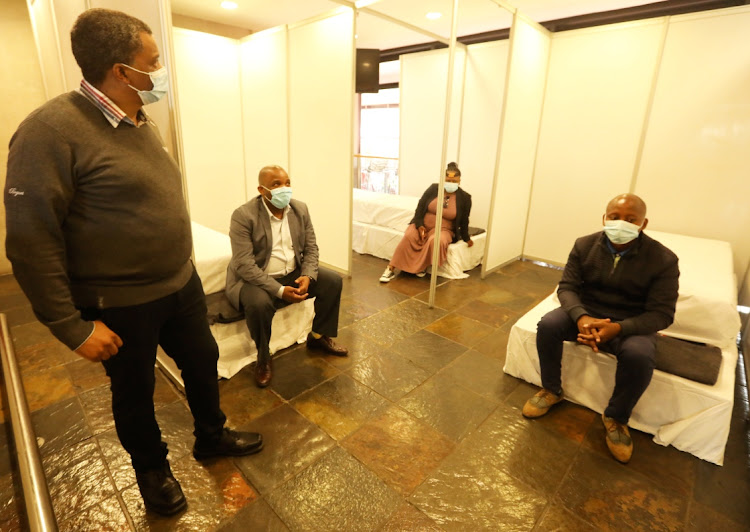 The Nelson Mandela Bay Stadium, which was last week identified as an isolation site to treat Covid-19 patients, will from this weekend have the capacity to accommodate 50 patients.

Deputy director-general of health Dr Litha Matiwane said the facility already had 50 beds, which was a good start considering the Bay had become the province’s coronavirus epicentre

He said the facility would house low-risk patients.

“So here we will have people who are not symptomatic or people who are maybe waiting for results, so that we can keep them from spreading the virus. If any of them show symptoms, then they get moved to a hospital but this is just for the 14-day isolation and we will only have one or two nurses,” Matiwane said.

Bay acting mayor Thsonono Buyeye said the municipality needed to officially hand over the building to the department, which will know what still needs to be done and it is up to it to take the process further.

“We are just supporting the department. They will take over and make sure the facility meets the health standards and requirements,” Buyeye said.

He said there was already pressure from people from various communities who had tested positive and were anxious about having nowhere to isolate, which created an urgency to have the stadium available.

“We hope we have made a meaningful contribution and we would love to do more for the community. This pandemic has forced us to act and do things differently and make some unpopular decisions because there is no way we can take normal processes based on the pressure we are under,” Buyeye said.

Mandela Bay Development Agency (MBDA) spokesperson Luvuyo Bangazi said two levels of the stadium had been set aside for the isolation sites, with each level having the capacity to hold 200 beds.

He said it was unlikely, but should there be a need for more space, there was a contingency plan to set up a marquee on the field.

Each room on the suite levels has three beds, and ablution services are scattered about the level.

Bangazi said 16 showers were being installed and would be completed over the weekend.

He said patients would have access to Wi-Fi, TV and meals, which would be arranged by the department of social development and the municipality.

He said the Raddison Blue Hotel and the Boardwalk Hotel had donated clean and sanitised linen, pillows and towels and there were drop-off points for food at various Spar stores.