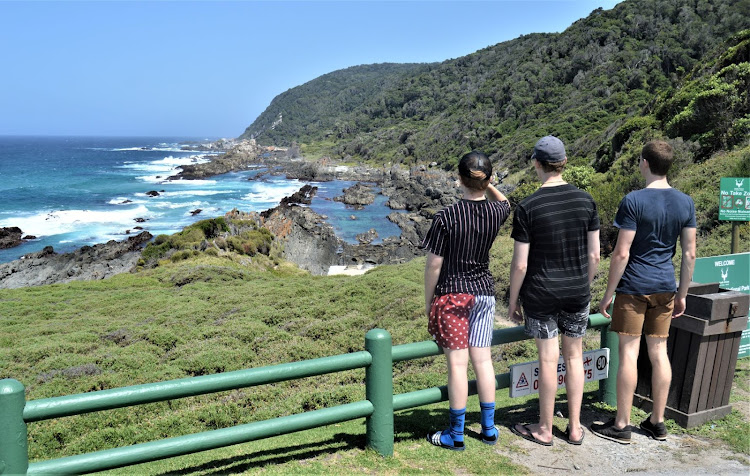 RUGGED BEAUTY: Contemplating our snorkelling 'safari' at the head of the Waterfall Trail in Storms River Mouth rest camp, centrepiece of the Tsitsikamma section of the Garden Route National Park
Image: GUY ROGERS

At Graveyard we hit gold.

This was the first pool on the Waterfall Trail Snorkelling Safari we had devised, so we were elated.

Big fish and even an octopus we had been hoping for — but this was something special.

The Waterfall Trail starts at the west end of the Storms River Mouth Rest Camp, headquarters of the Tsitsikamma section of SANParks’s Garden Route National Park.

A cornerstone of the park is its marine protected area (MPA), which is the oldest in Africa, and this MPA underpins the rich marine life along that section of the coast and sustains fisheries further afield.

Graveyard (our name for the pool) starts at the head of the path and runs parallel to it, forming a gorgeous blue avenue.

On its left flank, about half way along, the sea gushes in through a passage in the mussel-encrusted reef and along its opposite flank three gullies feed off the main thoroughfare.

We swam slowly into the second gully and there, perhaps three metres down lying among strewn rocks, luminescent through the crystal water, was the vertebrae of a dinosaur.

Or at least that’s what it looked like, it was so huge and ancient-looking and beautiful, rock-like but the colour of ivory, and with the symmetrical lines that seemed to signal it had come from something animate.

In fact of course it was from a whale and a little further on there was more evidence for this supposition — piles of great ribs lying on the bed of the pool glimmering yellow-orange through a thin layer of algae.

We dived down and were able to haul up one of these ribs to examine more closely, and it had the heft of pirate’s treasure.

So at some point in the past this huge creature perhaps already dead or simply ailing or injured must have got washed over the reef on a spring high tide or been forced through the reef passage.

And there the carcass had been nibbled away by hundreds of thousands of little marine scavengers until only the bones remained.

At the far end of Graveyard access narrows to a point where you have to worm your way through a cleft in the reef.

Then the seawater spills into a smaller pool, shallower and more vulnerable to the incoming waves but with a sandy bottom awash with brightly coloured stones and shells.

A metre above the low-tide surge is a jacuzzi-shaped plunge pool which was the lair, we had heard, of an octopus.

We spent some time trying to find it but it was either out foraging or tucked away having a sleep.

A 2019 study by Alaskan biologist David Scheel showed how octopuses change colour while they’re sleeping and the trigger for this colour-shifting seems to be that they’re dreaming.

Just like your dog might twitch while it dreams of chasing a cat, so the octopus’s pigment-containing cells are triggered as it sleepily fantasises, for instance, about chasing a crab.

We wished the octopus sweet dreams and pressed on.

On our previous visit to the Storm’s River Mouth camp we had hiked the 3½-hour round trip to the waterfall and back and taken note of the multiple rock pools along the way.

On a sweltering day each looked more enticing, in the view of my son, whose mind at the time was brimming with mythology, the bath houses of the gods.

It would have been too much of a deviation from our main destination goal at the time, but we promised ourselves we would return and do our own bespoke “snorkelling safari”. 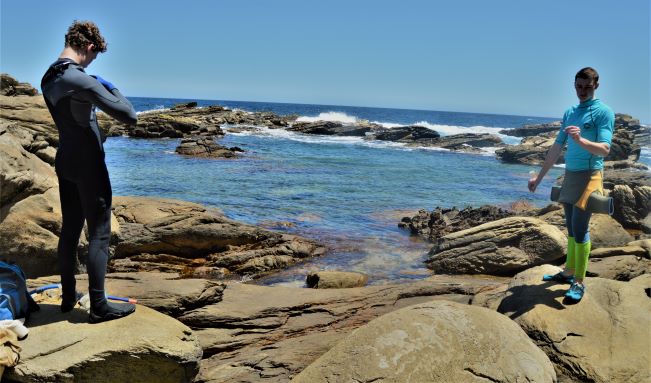 So this time around we kitted up in wetsuits and aqua shoes, packed snorkels and goggles, sandwiches, water and a flask of tea, lathered on block-out, pulled on hats and set off.

There are half a dozen interesting-looking pools along the Waterfall Trail.

Each one requires some scrambling down from the trail and across the rocks to get to, but each is brimming with life — velvety scarlet anemones, spiny brown sea urchins, scuttling crabs, slug-like chitons armoured like armadillos, bejewelled starfish  and a multitude of fish from tiny motes of silver to bulky ones as long as half my arm, each in their tribal colours — four-spot, green, cream, orange, belly-daubed, jungle camouflage.

After Graveyard was Big Blue, a trough of turquoise framed by a turret of rock with waves pounding through on either side sending detonations of white bubbles into the stiller part of the pool.

Here we found a jellyfish perhaps a metre in diameter, a living member of the species we had seen so often seen stranded and inert on Kings Beach back in Port Elizabeth.

We swam under it and were able to gaze up into its billowing, swirling galaxy of working parts.

It floated benignly then drifted into the surf zone where hopefully it would have been ejected in the next high tide. 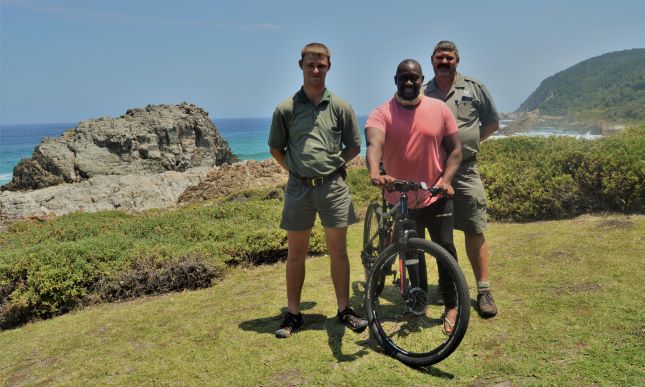 We returned to our oceanette in time to cycle down to the camp shop for provisions and then made a fire in the veranda braai.

In the foreground, vivid in the last rays of the sun, dolphins arrowed through the swell as it reared to break on the rocks, further out gannets dive-bombed for  sardines, and a brethren of gulls gathered in a queer little circle of white for a floating indaba.