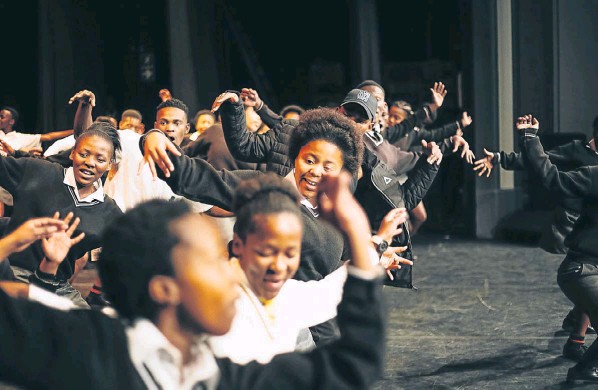 Bay youngsters are acting in a production that takes inspiration from the musical ‘Sarafina!’
Image: Marc Herve

More than 30 years after it was first presented at SA’s iconic Market Theatre in Johannesburg, the musical Sarafina! has been the inspiration for a 2018 reinvention of its central theme which remembers the landmark 1976 youth uprisings.

So what, Sara Fina!? will see more than 40 Walmer Township youngsters take to the stage for a second time this year when they stage the locally-written play at the Savoy Theatre next month.

The cast – who wanted to tell a tale a little closer to home – chose to reflect on today’s legacy of those who fought for freedom in 1976, by telling the story of Sara Fina, a bright pupil from Walmer High School.

The last year of high school can be daunting for anyone, but Sara finds herself in a predicament with no sign of getting a bursary.

As peer pressure and studies mount, her youthfulness and bravery are tested when she is forced to choose between society and her boyfriend – a foreigner from her school.

Masifunde’s Academy of Creativity drama teacher Xabiso Zweni, 31, of Bethelsdorp, also the director and writer of the play, said the actors came up with the concept, but he wanted to depict something new about the story that had such a long history in the theatre industry.

“Everyone knows what happened in 1976. I wanted them to tell their own story, a story that relates to 2018 and the issues they face in their own environment and we came up with this concept,” Zweni said.

Working with a vibrant group of individuals had made the journey to the second run of the show memorable, Zweni said.

“After we delivered the first show at the Opera House last month, these kids were emotional because of the way the audience had received their storytelling abilities. It meant a lot to me to see how they have grown. Not everyone has maths or sporting abilities but this play gave them a taste of what their future could hold. “Their potential was ignited. “These kids tell the story that so many can relate to in this unique version of Sarafina! .

“If the audience can take something away after seeing it, I would like everyone to reflect on what they can do to contribute – not even financially – to help these kids. Something to uplift them,” Zweni said.

Musical director Sivuyile Ngewu, 26, of Zwide, said: “I wanted to create a musical which was sparked by the xenophobic attacks that took place in the country a while back and when Xabiso mentioned this play, we decided to collaborate.

“This is a beautiful story that is being told by these youths and seeing them perform with so much emotion and passion for the story is impressive,” he said.

The cast features 48 youngsters from grades 6 to 12 in an hour of onstage music and fun.

Yanelisa Matiose, 17, a grade 10 pupil at Walmer High School, who plays the lead role of Sara Fina, said this story was close to her heart.

Co-star Sibusiso Kelemana, 17, who plays Tinashe, Sara’s boyfriend, said: “The most important message this play showcases is that we are all human beings first before we are our race and creed.

“We are all African before we are South African and we should treat one another with great respect.

“I feel so proud of myself and everyone involved for telling this story,” he said.

Get the news in your inbox
Next Article