Stanley Bergman explains how, despite setbacks, he now heads Fortune 500 company in US Ex-Grey pupil makes his mark 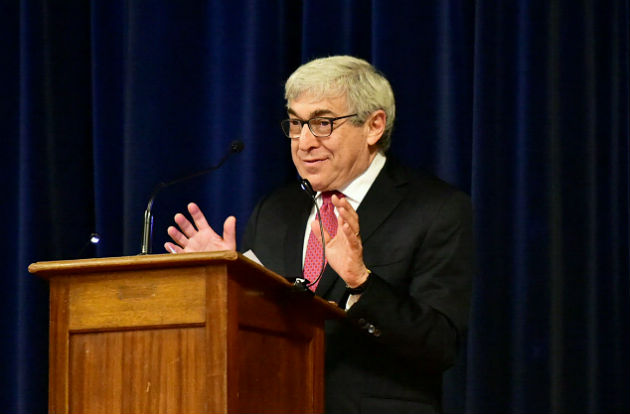 In his younger years he struggled so much at school that one of his teachers told him not to bother with high school – but today he is at the helm of a billion-dollar multinational healthcare company.

This is the success story Stanley Bergman, 68, brought back to Port Elizabeth for his 50-year reunion at Grey High School.

Bergman, who lives in New York, has been the chief executive of Henry Schein Inc since 1989.

The Fortune 500 company has a presence in 32 countries and is valued at $13.3-billion (R163-billion) according to Forbes.

Returning to his alma mater as key speaker at a memorial lecture on Friday morning, Bergman attributed his success to the people he had encountered throughout his life.

“It’s all about people. People drive everything. If you treat people well, they will follow you [and your vision].

“I struggled in education, and was once told not to bother to go to high school.

“What we learn in the classroom is critical, but what we learn on the playing field of life is more important – though you can’t play on the field if you aren’t literate.”

However, two other teachers had given him the confidence with which he carried himself today, he added.

“I was not particularly good at math or science, and certainly not at history. [My geography teacher] here, Mr Earl, had a profound impact on my life.

“He said in matric [year that] my handwriting is terrible, so he made me come in on afternoons and practise my handwriting – in a way that was not humiliating.

“Without Mr Earl and [a professor from Wits University], I would not be here today.”
Bergman emphasised the need in business for mentors and good summer camp counsellors.

“The counsellors [at these American camps] get everyone to play together.

“You should also look for mentors [and surround yourself] with people who are smarter than you. If there is a chance to help young people, do it.”

Bergman believes the youth have a critical role to play in business and society at large.

“I make a point of always travelling with a millennial, and everything I do is criticised. I believe that millennials are likely to be remarkable, that their impact on the world [brings] hope.

“It’s a huge advantage to hire millennials, because they care about the world and can drive you crazy with questions.”

He believes talent and data will be the most important resources of the future.

“Whoever owns data will control the world. We need to be more agile and faster at collaboration.

“I am optimistic about the benefits of technology. When I grew up, I had asthma and there was no drug to treat asthma. There has been enormous progress, the amount of technology in the pipeline in the healthcare industry is massive.

“My younger son went for brain surgery a year-and-a-half ago and it was like something from science fiction, and it took him [a few] weeks to recover.

“There is so much hope [in this industry].”

Business leaders also had a responsibility to add to this hope.

“I’ve learned that the best way to do well is to do good. The combination of social responsibility and business is a huge formula [for success].”