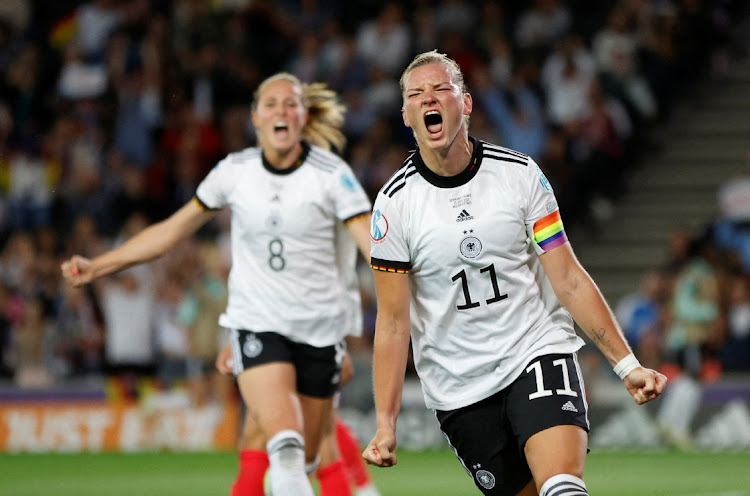 Alexandra Popp missed the last two women's European Championships through injuries but the German skipper has more than made up for it with six goals in this edition after a double in Wednesday night's semifinal win over France.

Eight-time champions Germany beat France 2-1 with Popp scoring the opener in the first half and the winner in the second to book a spot in Sunday's final at Wembley against hosts England.

Popp is playing at her first Euros at the age of 31 but she is leading by example having scored nearly half of Germany's goals at the tournament, with the rest of her teammates chipping in with seven.

“I have to admit I am more emotional than I used to be because I know how I have arrived at this point. Being here, having the opportunity to perform and being fully fit at this stage makes me very proud,” Popp told reporters.

“But I also have to say a big thanks to everyone who has helped me — the medical staff at my club, the coaches both at club level and here. They kept believing in me and they gave me the opportunity to be here.

“I've become very dangerous now, like in the past. It wasn't the case for quite a while because I was injured.”

Popp blew her chances of winning the title with Germany in 2013 when she played through an ankle ligament injury to help Wolfsburg win the treble in 2012-13, missing the Euros as a result.

A knee injury in 2017 saw her miss the Euros again and another injury last year would have meant a third edition without a continental tournament for Popp had it not been postponed to 2022 due to the Covid-19 pandemic.

A positive Covid-19 test last month did not deter the forward either as she put all her problems behind her to score in every game so far — a tournament record.

On Sunday, she will not only be fighting for the title but also the Golden Boot having joined England's Beth Mead at the top of the tournament's goalscoring charts, but for Popp it is all about the team.

“If I don't get these passes, I don't score. It makes me happy when they create chances for me to score,” she said, praising the team's spirit as the best she had seen in a decade.

Meanwhile, England's Leah Williamson knows the job is far from done but the captain hopes the team can inspire the home crowd to not only get behind them but also enjoy the moment.

Hosts England thrashed Sweden, the highest-ranked team in Europe, 4-0 on Tuesday to reach the final.

Sarina Wiegman's side have been in red-hot form, scoring 20 goals in the tournament and conceding only once in five games.

“It's genuine and the crowd can enjoy that with us. I hope that the crowd at Wembley is going to have as good a time as we are going to have because I promise you, we will enjoy it.

“I've got a scarf around my neck which says: 'Home is where the heart is' and to have our families on this journey, to walk out at Wembley, I think that is something we really have to take in.” — Reuters