‘That was for you, SA’ — Banyana star dedicates Wafcon win as Mzansi celebrates 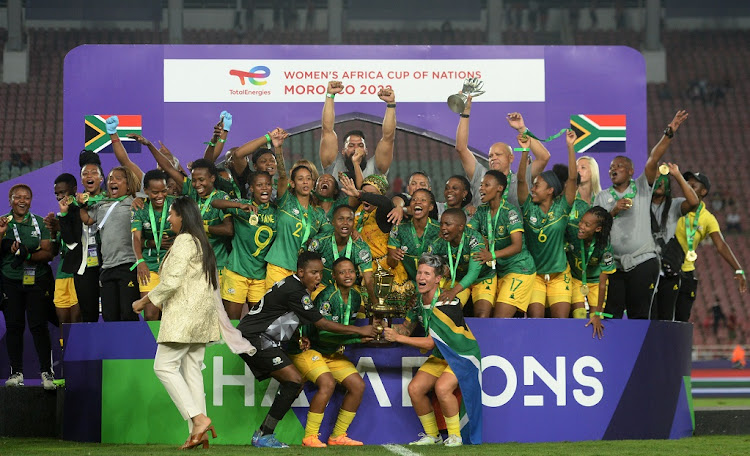 SA was in celebration mode this weekend when Banyana Banyana beat hosts Morocco to win the 2022 Women's Africa Cup of Nations at Stade Prince Moulay Abdellah in Rabat.

Two second half goals in eight minutes from Hildah Magaia sealed the win. Morocco pulled one out just minutes from time but it wasn't enough.

With the win, Banyana became the first team to win all six games at the tournament and finally won the cup after failing at the final hurdle on five previous occasions.

The team danced, sang and cheered after the win, and were joined in celebration by millions of South Africans.

Coach Desiree Ellis said even before the match she knew the night would be special.

“When I looked at the players at team meetings, I almost didn't want to do team meetings because the players were so confident. They always came in singing and dancing  with their big speakers.

“They were so confident and determined even when we lost Thembi [Kgatlana, who left the tournament due to a ruptured Achilles],” she said.

Many shared their excitement about the win.

Here's a look at some reactions:

Guys, let’s also take a moment to appreciate this lady here, one of the legends of the game. Noko Matlou has been part of the Banyana Banyana setup for as long as I can remember, great servant of the game ❤️ #BanyanaBanyana #Banyana #WAFCON2022 pic.twitter.com/j8q60bMRSl

This is a bunch of Winners!!! #Banyana #Morocco pic.twitter.com/hylVEqbYsB

We are #banyana give us the Women's world Cup already let the rest of the world play for silver Medal 😭❤️ pic.twitter.com/qz0bo0gANI

Can we all agree that Banyana Banyana is carrying the country rn? 🥺🔥#banyana pic.twitter.com/lq033j4Wpg

Can Banyana play all Bafana Bafana games!!! Phela this is Joy bafwethu😂😂😂🇿🇦🇿🇦🇿🇦🇿🇦#TotalEnergiesWAFCON2022#banyana#BanyanaBanyana#ANCKZNconference pic.twitter.com/Zf3S6AtOr9