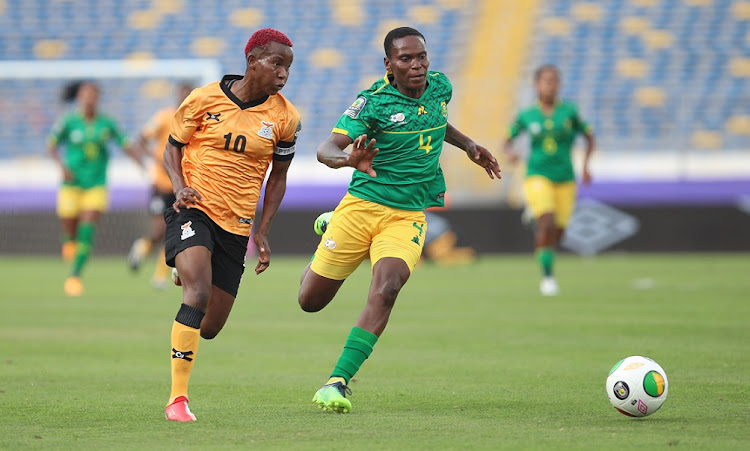 Grace Chanda of Zambia is challenged by Noko Matlou of SA during the 2022 Women's Africa Cup of Nations semifinal at Stade Mohammed V in Casablanca, Morocco, on July 18 2022.
Image: Weam Mostafa/BackpagePix

Linda Motlhalo converted the penalty deep in added time awarded by Ethiopian referee Lidya Tafesse Abebe as perennial bridesmaids Banyana reached their sixth Wafcon final, where they will aim to go one better than their five previous runners-up finishes.

Jermaine Seoposenwe was the player brought down, but Abebe didn't award the spot-kick before she was aided by the VAR to do so.

Banyana will meet either Nigeria or hosts Morocco — who were to compete in Monday night’s late semifinal (10pm SA time) — in the final at Stade Prince Moulay Abdellah in Rabat on Saturday.

Having made the right-back slot her own, Lebogang Ramalepe surprisingly didn't make the XI as she settled for a berth on the bench. Second choice right-back Bongeka Gamede was preferred.

Banyana Banyana are in the #TotalEnergiesWAFCON2022 FINAL!!!!!

With Sibulele Holweni, the usual suspect at left-back, ruled out of the match-day squad due to the knee injury she sustained in the 1-0 quarterfinal triumph over Tunisia, second choice left-footed fullback Karabo Dlamini made the XI.

Melinda Kgadiete was handed her first start of the tournament to spearhead Banyana's attack alongside Seoposenwe. Zambia had no notable modifications to their line-up from their previous games.

A Zambian crowd of about 150 people boisterously supported their team, outshining a handful of South Africans led by famous erstwhile Orlando Pirates fan Joy “Mama Joy” Chauke, who has switched allegiances to Durban team Royal AM.

Cheekily beating a rival at their own game, the Zambian throng relied on vuvuzelas, the infamous plastic “instrument” invented in SA and popularised in the 2010 World Cup, to create a decent atmosphere in the large venue.

The attendance was so poor that, excluding stadium staff and dignitaries, not more than 500 seats were occupied.

Banyana retained the ball brilliantly as usual, with Refiloe Jane and Motlhalo the orchestrators in midfield. However, SA's brilliant interplay too often failed to culminate in something that could have unsettled the  Zambian rearguard as Banyana fail to make box entries.

It was Shepolopolo who enjoyed more entries into the penalty area in the first half with skipper Grace Chanda using her pace to terrorise Dlamini's right side. Noko Matlou and Bambanani Mbane used their experience to clean up, forcing the Zambian attackers into rushing their final pass or finish.

Seconds past the hour-mark, Abebe awarded Banyana a penalty after Noxolo Cesane was brought down, but quickly changed her decision to a free-kick instead after a VAR intervention. Seoposenwe saw her resultant set-piece deflected for a corner.

* Sihle Ndebele is in Morocco courtesy of Sasol