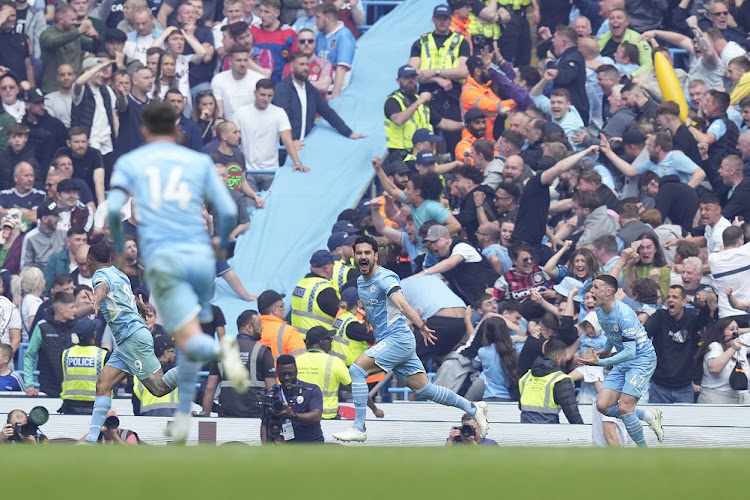 Ilkay Guendogan (centre) of Manchester City celebrates after scoring the winning goal in the Premier League match between against Aston Villa at Ethiad Stadium in Manchester on May 22 2022.
Image: EPA/Andrew Yates

Manchester City won the Premier League title by a point from Liverpool on a thrilling final day on Sunday, prompting comparisons with their dramatic victory in 2012.

Pep Guardiola's side survived a huge scare and fought back from 2-0 down against Aston Villa, scoring three goals in five second-half minutes — including two from substitute Ilkay Gundogan — to seal victory.

City won their first top-flight league title since 1968 in a similar manner in 2012, when Sergio Aguero's stoppage-time winner earned them a 3-2 win over Queens Park Rangers as they pipped Manchester United to the trophy on goal difference.

“In the space of five minutes, City had transformed its despair into something raw and urgent and delirious,” Rory Smith wrote in the New York Times.

“It was not quite the same as Aguero's title-clinching strike 10 years ago, what City's fans now refer to simply as '93:20', but nor was it some pale imitation, some ersatz version.

“It was something close to an equivalent, and that was more than enough.”

Martin Samuel wrote in the Daily Mail that City's win over Villa might have been more dramatic than Aguero's goal.

“For 75 minutes they turned in arguably their poorest display of the season, certainly at home,” Samuel wrote. “And then, arguably, the greatest comeback of them all.

“Greater than that Aguero moment? Probably, yes, because the road back was so much harder.

“Queens Park Rangers were down to 10 men that day, and safe from relegation. They were a poor team, though. Villa, by contrast, are dangerous, certainly on the break.”

The Daily Telegraph's Jason Burt praised the spectacle of the Premier League.

“Twelve minutes and 22 seconds after it looked over, City had won it and it was bedlam, pure bedlam with players running to all corners of the stadium and Guardiola cavorting uncontrollably,” Burt wrote.

“There can be no doubt. This glorious Premier League just keeps on delivering.”

There was also criticism of a pitch invasion after City's win, which followed a number of similar incidents across English football.

"[Manchester City fans] eventually vacated the pitch, though not without incident and City promised a lifetime ban for the fan who assaulted Robin Olsen, the Villa goalkeeper,” Henry Winter wrote in the Times.

“It was depressing that, once again, a celebration should be scarred.”