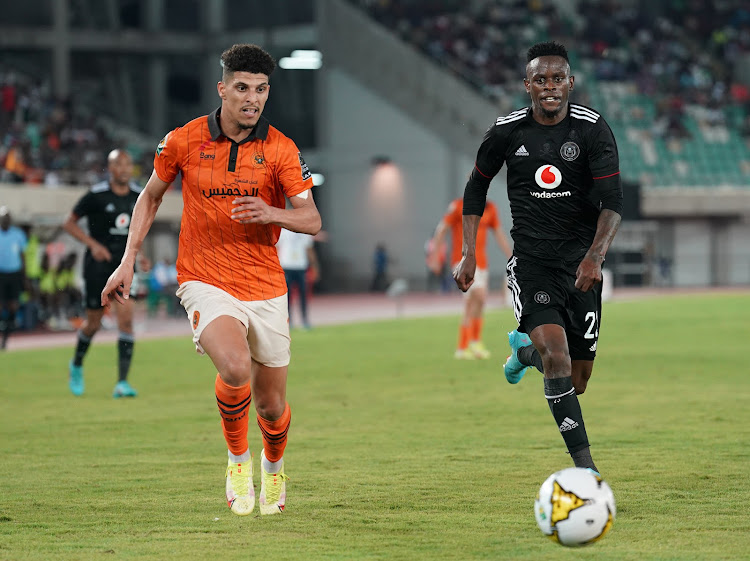 Youssef Elfahli of RS Berkane and Innocent Maela of Orlando Pirates challenge for the ball during their CAF Confederation Cup final at the Godswill Akpabio International Stadium in Uyo, Nigeria.
Image: Kabiru Abubakar/BackpagePix

Orlando Pirates fell at the final hurdle as they lost 5-4 to Moroccan side RS Berkane in a penalty shoot-out in the final of the Caf Confederation Cup at the Godswill Akpabio International Stadium in Nigeria on Friday.

The two teams could not be separated after 120 minutes being tied 1-1, forcing the match into the lottery of penalties where RS Berkane players showed nerves of steel to prevail.

The penalty was only confirmed after controversial Zambian referee Janny Sikazwe consulted with the VAR after Thabang Monare brought down Mokadem in the box.

RS Berkane thought they were going to seal the match with a goal in extra time but Pirates scored the equaliser after 117 minutes from an effort by attacker Lorch who poked the ball past the crowded RS Berkane defenders.

This turned out to be third time unlucky as Pirates suffered defeat to Al Ahly in the Champions League final in 2013 and to Tunisian giants Étoile du Sahel in the Confederation Cup final in 2015.

Pirates showed intent with co-coaches Mandla Ncikazi and Fadlu Davids starting with players like Peprah Kwame and Kabelo Dlamini who were supported by Ben Motshwari, Thabang Monare and Goodman Mosele.

Most of Pirates’ attacks came from deep in the midfield to Peprah and Dlamini but they could not find their way past Hamza who was the busier of the two goalkeepers in the match.

Though Pirates created most of the chances, RS Berkane had their moments on the attack through Chekri El Bahri, Abdelkarim Baadi and Bakre El Helali but they could not get the better of Ofori.