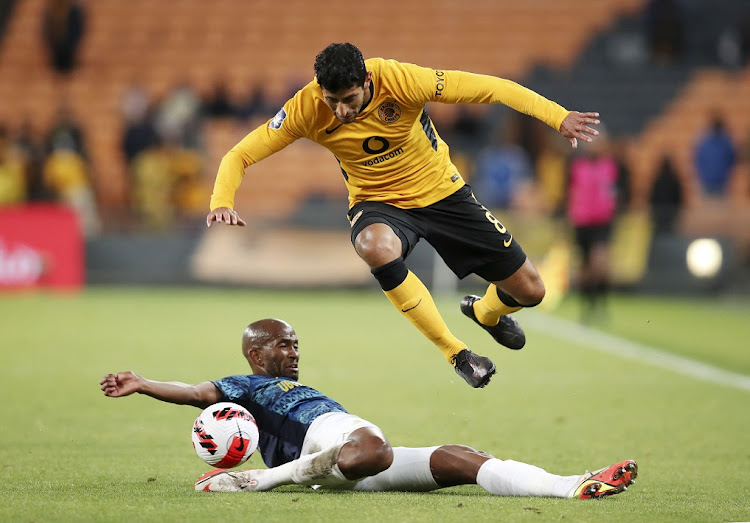 Leonardo Castro of Kaizer Chiefs is tackled by Mosa Lebusa of Mamelodi Sundowns in the DStv Premiership match between at FNB Stadium in Johannesburg on May 8 2022.
Image: Muzi Ntombela/BackpagePix

It was billed as the “takeover” of FNB Stadium by champions Mamelodi Sundowns and while the attendance was disappointing amid wet and cold weather, the game lived up to expectations as the Brazilians were held to a 1-1 draw by Kaizer Chiefs.

As expected, the Sundowns supporters were outnumbered by their Amakhosi counterparts at Sunday’s DStv Premiership encounter at FNB Stadium, but the Yellow Nation shouted the loudest cheering on their champion team.

Occupying the stands on the far side, Sundowns’ fans found their voice from kickoff, warming themselves against the cold with their exuberance.

Chiefs’ equaliser came from Phathutshedzo Nange in the 76th.

Sundowns struggled to find their rhythm in a first half that saw both teams create good scoring opportunities, with league top-scorer Peter Shalulile forcing a great save from Chiefs keeper Bruce Bvuma.

Perhaps frustrated, Downs co-coach Rulani Mokwena disappeared into the tunnel headed for the change room a minute before the halftime whistle sounded.

Playing three centerbacks, the Brazilians packed their midfield and looked for openings to penetrate via the creativity of playmakers Themba Zwane and Sirino. Central midfielders Andile Jali and Sphelele Mkhulise won the central battle for possession against Cole Alexander and Nange.

Sundowns took three minutes to open the scoring after the restart with Modiba scoring a wonder goal after a fluid team move.

Chiefs attackers Khama Billiat and Keagan Dolly, the two creative players who usually combine to turn on the style for Amakhosi, were largely anonymous throughout the 90 minutes.

Talented but much-maligned Zambian attacker Lazarous Kambole, who was nearly offloaded at the beginning of the season, battled to combine with Billiat and Dolly in Chiefs’ front line.

Amakhosi co-coaches Arthur Zwane and Dillon Sheppard pulled off Leonardo Castro for Kgaogelo Sekgota and Kambole for Samir Nurković to add numbers and height in attack.

Having had a quiet game, Nange equalised for Chiefs, driving the ball from the edge of the box past Sundowns keeper Reyaad Pieterse.

While Sundowns continued to probe in search of a winner, Nange’s goal gave Chiefs some confidence. After the changes, Amakhosi made more entries into the final third and one of them let to a penalty.

With six minutes remaining, Dolly stepped up and directed his spot-kick straight at Pieterse, who made a double save to keep his side in the match.

A thrilling encounter at the FNB Stadium ends with the spoils shared between The Brazilians and the Glamour Boys! 🤝

The draw is a setback for Chiefs’ objective of finishing as runners-up and qualifying for the next Caf Champions League, or third to take part in the Confederation Cup.

Chiefs’ 43 points with two matches remaining mean second-placed Cape Town City, on 48 points, will need a point from a possible six to remove Chiefs from the equation.

Royal AM, who are third on 45 points but with three matches to go, are looking good to end where they are, though second place will be first prize for the Durban team.

Chiefs play Sekhukhune United in their next match and will close their campaign with a home clash against relegation-threatened Swallows FC on May 21.

Amakhosi have managed a meagre 21 points from a possible 42 in their 13 Premiership home matches this season.

The point took Sundowns to 62 points, which means they will fall short of their target of 70. They play Stellenbosch and Royal in their remaining two matches.