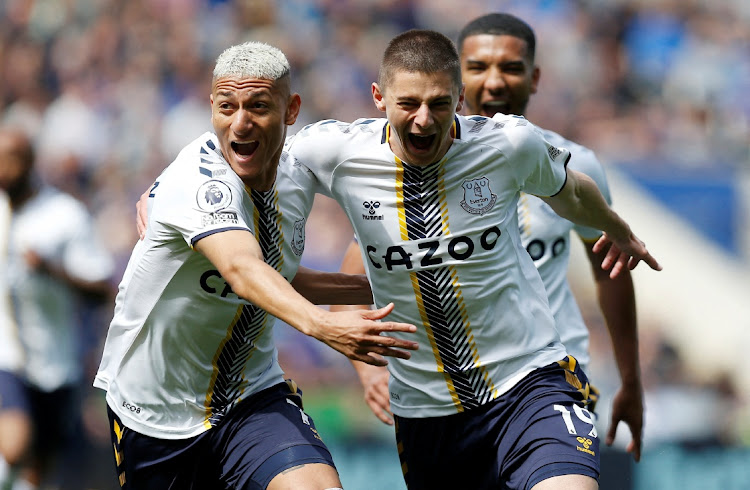 Everton manager Frank Lampard said his team are getting more confident after they climbed out of the Premier League relegation zone with a gritty 2-1 victory at Leicester City on Sunday.

Defenders Vitalii Mykolenko and Mason Holgate scored at the King Power Stadium as Everton moved up two spots to 16th on 35 points, one point above the drop zone.

They have four matches left this season, one more than all the teams below them.

"I'm proud with how the players reacted to conceding," Lampard said. "They kept going. They were excellent. I think we're building confidence.

"It was a tough game against a tough opponent, but I thought we deserved it. We defended well and showed great resilience and created chances to score more."

Sunday's win was Everton's second league victory on the road this season, having last won an away league game in August against Brighton & Hove Albion.

Everton, who have won three of their last five league games, travel to relegated Watford on Wednesday.

"We should enjoy results like that. They're huge," Lampard added.

"But by the time we get home tonight, we have to move our minds onto Watford and the games that are coming. We are by no means safe yet. It's far from done."

Lampard said defender Yerry Mina will undergo a scan on Monday for a calf problem after he was taken off in the 17th minute, while Mykolenko had to be withdrawn in the 66th minute due to a cramp.

"Yerry had a small feeling in his calf," Lampard said. "We don't know (how bad it is yet). Hopefully, it isn't a tear.

"We're hoping it's not a high-level injury and we can keep him involved in the next two weeks."

Everton goalkeeper Jordan Pickford made stunning saves in the second half.

“It's about commitment, attitude, team spirit. That's what gets you over the line.”

Holgate nodded in a rebound to put Everton back in front at the half-hour mark after Leicester striker Patson Daka cancelled out Mykolenko's early opener.

The unmarked Holgate scored from close range after Richarlison's header was beaten away by Leicester goalkeeper Kasper Schmeichel after a corner.

Earlier, Mykolenko gave Everton the perfect start, firing a stunning left-foot volley from the edge of the box in the sixth minute after Alex Iwobi clipped a ball in from the right.

But Leicester, looking to bounce back after their Europa Conference League exit, recovered quickly with Daka levelling in the 11th minute after a defensive mix-up.

Leicester created many chances in the second half, especially through substitute Harvey Barnes, but Pickford produced another inspired performance.