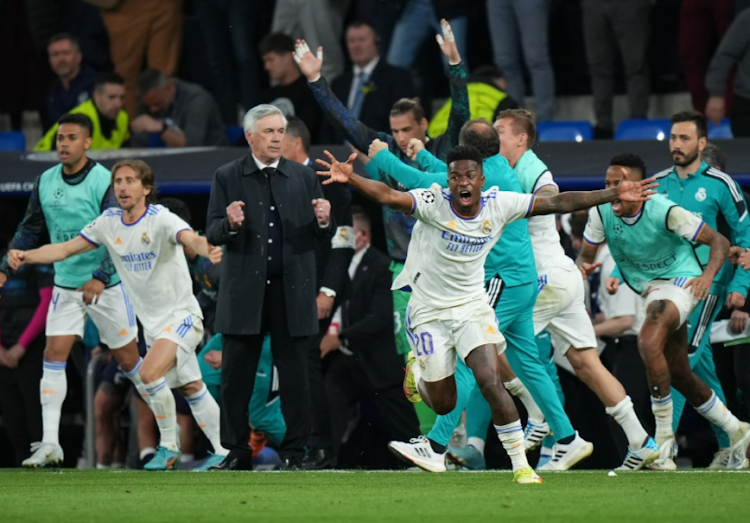 After another magical night at their Santiago Bernabeu stadium, Real Madrid coach Carlo Ancelotti put their incredible run to the Champions League final down to a never-say-die attitude that is part of the club's fabric.

Real were on the brink of elimination against Manchester City on Wednesday, but fought back to win 3-1 after extra time and 6-5 on aggregate in an enthralling semifinal.

It was the third consecutive time they had come from behind in this season's knockout stage, after previous fightbacks against Paris St Germain and Chelsea, to stay on course to win Europe's elite club competition for the fifth time in the last nine years.

“The greatness of this club is this. It is a club that does not allow you to lower your arms when it seems that everything is over,” Ancelotti told Movistar Plus in his usual calm manner.

“It is a feeling that gives you the strength to continue, to continue to believe ... We played a match against a very strong rival, solid, competitive ... When everything seemed to be over, we looked for the last bit of energy to match it.

“If you equalise in the last minutes you have a psychological advantage. You enter another dynamic and in front of our fans that is fatal to the visitors. We eliminated three teams capable of winning the title. It has been a success.”

Brazilian midfielder Casemiro said the club enjoyed a major confidence boost from clinching the La Liga title on Saturday and celebrating with their fans for the first time since the end of the Covid-19 pandemic restrictions.

“We have spent two years without contact with our fans, we need to enjoy them because they are the ones who give us energy to play like we did tonight,” Casemiro said.

“The great virtue of this club is never giving up fighting until the end. It's in our anthem: 'Until the end we go, Real!' That is our spirit, never surrender.”

Real will now face Liverpool in the final in Paris on May 28.

Casemiro, who was part of the team that won the 2018 Champions League final against Liverpool in Kyiv, thinks beating the Premier League side will be “a complicated task”.

Ancelotti agreed, heaping praise on an opponent that he knows well from his time spent in charge of Everton.

“I'm very happy to participate in another final against a great team, I played against them as a player and as a coach. I've lived in Liverpool for two years, for me it's like a derby, I'm still an 'Evertonian' so it feels personal to me.”

Asked whether he thought Real had lost, the Italian told BT Sport: “No, I have no time to think about this. It was difficult at that moment when City had a good control of the game but in the last opportunity we were able to go to extra time.

“I am really happy to be there in the final, in Paris against another great, great rival but we are used to it. I think it will be a fantastic game for football.” — Reuters