Everton's Pickford praised for world-class saves in win over Chelsea 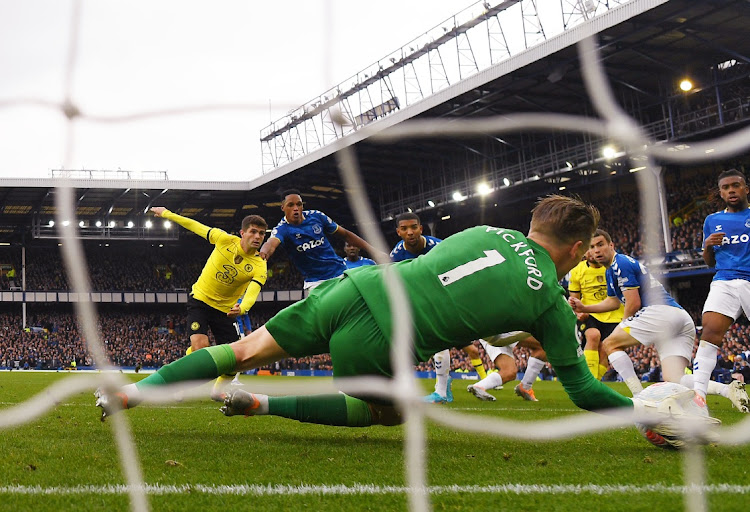 Jordan Pickford of Everton saves a shot from Mateo Kovacic of Chelsea during the Premier League match at Goodison Park on May 1, 2022 in Liverpool
Image: Michael Regan / Getty Images

Everton's Jordan Pickford showed exactly why he is England's first-choice goalkeeper after a number of outstanding saves to earn his relegation-threatened club a 1-0 Premier League win over Chelsea on Sunday, skipper Seamus Coleman said.

Everton sealed their victory thanks to forward Richarlison's goal but had Pickford to thank too, after the 28-year-old made a goalline save to deny Cesar Azpilicuta — an effort that some pundits described as the save of the season.

“That save he came back off the line and parried out was world class, and we see that on a daily basis in training, and that's why he's England's number one — some of the saves were world class,” Coleman said.

Pickford later blocked Antonio Rudiger's goal-bound effort with his face before keeping a shot from Ruben Loftus-Cheek out in front of a roaring Goodison Park crowd.

“My face isn't too bad ... I've had worse than that before,” Pickford said. “It's what I'm there for, to make saves, to help the team.

“It was a big team effort and it was all about getting a big three points for us as players, the fans and the club. I really enjoyed it. Everyone battles for each other.”

Everton are 18th, two points adrift of Leeds United, who have played a game more.

“That save was incredible. Pickford has been criticised in the past because he has a tendency to do something rash,” Osman told the BBC.

“But not today. It was arguably his best-ever game for Everton in Everton's most important game of the season.”

Sky Sports pundit Jamie Redknapp called it the save of the season.

“It was magnificent. We've given Pickford a lot of stick in the past, but he was brilliant,” Redknapp said.

Chelsea could still miss out on a top four spot if they continue to have mixed results over their final four games, manager Thomas Tuchel said.

“I said this many weeks ago that I didn't feel safe and we're never safe ... if we are in a race for top one, top two or top four, no matter what the race, the last four games to only have four points will never be enough,” Tuchel told reporters.

“We have to take care about ourselves. At the moment we don't get the points when we play well, and deserve more and we lose when we play OK. This is a bad mixture.”

Richarlison's goal came after an error by Chelsea skipper Azpilicueta and Tuchel said his team were paying the price for big mistakes in their last few games.

“We knew what was coming and like in the last matches, we struggled to have clean sheets,” Tuchel said. “In the last four we had one, against West Ham United, it's the only win we have and I'm very disappointed.

“What can I do? The ball is free, give a goal away, it's the worst thing that can happen ... It happens too often. We struggle to play without big mistakes and it is why we struggle to have results.”