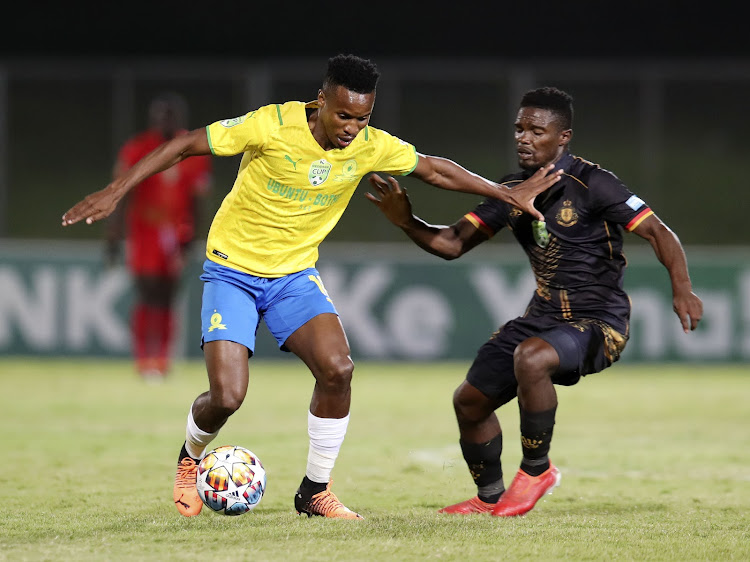 Themba Zwane of Mamelodi Sundowns shields the ball from Sphesihle Msomi of Royal AM during their Nedbank Cup semifinal at the Chatsworth Stadium.
Image: Muzi Ntombela/BackpagePix

Mamelodi Sundowns remain on course to win a domestic treble after they capped a remarkable week in which they were confirmed as SA league champions by earning a place in the Nedbank Cup final after beating Royal AM 2-1 at the Chatsworth Stadium in Durban on Saturday.

Sundowns meet Dan Malesela’s Marumo Gallants at the Royal Bafokeng Stadium on May 28, with the kickoff time confirmed as 6pm.

Marumo won this competition last season when they were still known as Tshakhuma Tsha Madzivhandila (TTM).

On Wednesday night, Sundowns won their fifth DStv Premiership title after playing to a 0-0 draw against Cape Town City, taking their points tally to 58 which were enough to confirm them as champions with four matches to spare.

Sundowns won the MTN8 after beating Cape Town City in Durban earlier in the season.

Aubrey Modiba’s exquisite free kick on the edge of the area gave the Brazilians a 1-0 lead just after the hour mark before Pavol Safranko scored their winner after Thabo Matlaba had found the equaliser for the home side.

Modiba’s goal came after a relentless attack by Sundowns in the second half and referee Victor Hlungwani should have pointed to the spot when Safranko was fouled by Matlaba inside the area.

So fast was the action that Hlungwani was not sure whether the foul happened in the 18 area box and had to consult his assistant before giving Sundowns a free kick that Modiba fired in.

Matlaba redeemed himself in the 72nd minute, his powerful shot inside the area deflecting off Sundowns goalkeeper Denis Onyango before hitting the back of the net. The goal came as Royal took control of the dramatic match.

Nyame’s goal kick was blocked by Peter Shalulile and went onto the path of Safranko who easily slotted home inside the area.

Modiba should have doubled his tally in referee’s optional but took too many touches before he was dispossessed inside the area.

Royal were always threatening to score but Sundowns held on to their lead, denying the Durban side a chance to appear in the cup final in their maiden season in the top flight of SA football.

But all is not lost for Royal who suffered their first defeat in 13 matches in all competitions in the 2022 season. John Maduka’s team still stand a chance to finish in the second or third spot in the Premiership.

Should Royal finish in second position they’ll represent SA in the Caf Champions League while a third spot will book them a place in the Caf Confederation Cup.