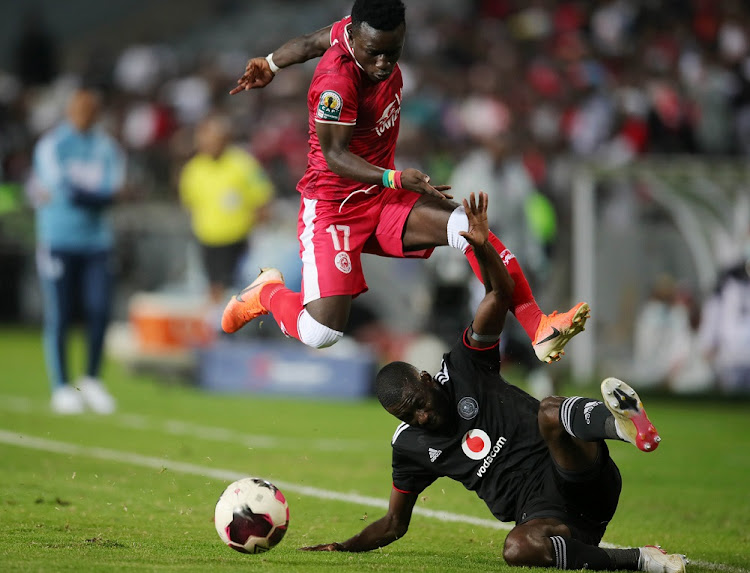 Orlando Pirates may be scraping for results domestically and in the danger of missing out on continental football next season, but they gave their supporters something to cheer by advancing to the semifinals of the  Caf Confederation Cup on Sunday.

Having lost the first leg quarterfinal 1-0 in Dar es Salaam last Sunday, the Buccaneers turned the tables on Simba at a raucous Orlando Stadium as Kwame Peprah’s goal in the second half drew the scores level on aggregate at 1-1.

Pirates keeper Richard Ofori emerged as the hero of the 4-3 penalty shootout win, saving one penalty and stepping up to convert the winning spot-kick.

Jonas Mkude’s opening penalty was saved by Ofori and Henock Banda hit the post while Shomari Kapombe, Maddie Kagere and Mohamed Hussein all converted their penalties for Simba.

Deon Hotto and substitutes Gabadinho Mhango and Tshegofatso Mabasa sent Simba keeper Aisha Manula the wrong way while another substitute, Kabelo Dlamini, saw his penalty saved when he could have wrapped it up for Pirates.

While Simba have been poor away from home, the Tanzanian powerhouses arrived in Johannesburg with a measure of confidence after their win in the first leg last Sunday.

Knowing they had to start well and score early to settle the nerves and grow into the match, Pirates co-coaches Fadlu Davids and Mandla Ncikazi started with two strikers — Ghanaian Kwame Peprah and Zimbabwean Terrence Dzvukamanja — in an unusual occurrence for Bucs even at home.

The decision proved to be a good one as Pirates’ best chances in the first half came the way of two strikers with and midfielder Fortune Makaringe, who missed a header from a cross from Thembinkosi Lorch with only Manula to beat.

Having denied Pirates the crucial away goal Simba were happy to sit back, using a defensive back five to absorb pressure.

Lorch and Deon Hotto on the wings struggled to create enough spaces and chances for the forwards, while Makaringe and Abel Mabaso lacked cohesion as a central midfield pairing as Pirates went into the break still trailing 1-0 on aggregate.

Bucs again started the second half the better side. Linda Mntambo replaced Mabaso from the break and the skilful midfielder instantly gave Pirates the creative edge they lacked in the first half.

The advantage swung Pirates’ way when Simba striker Kope Mugalu was shown a straight red card in the 57th minute, a minute after missing the visitors’ best chance of the match.

Mugalu’s foul on Pirates centre back Olisah Ndah was initially reprimanded with a yellow card but that was upgraded to red after Seychelles referee Bernard Camille consulted the video assistant referee.

Tempers flared when Camille showed red with players and officials from both sides having to be separated.

A Simba member of the bench was seen spraying water from a bottle towards the Pirates bench and officials, and in the fray a member of the home side’s technical team was also shown red.

As soon as the melee died down the crowd erupted as Peprah met a cross from the right with a powerful header make the score 1-1 on aggregate.

Pirates threw caution to the wind as they rang the changes in the second half in pursuit of the winning goal but lacked a killer pass while they will feel hard done by some VAR decisions that appeared to go against them.

Pirates could have avoided penalties but Mntambo hit the post with a header with the last action of the match.