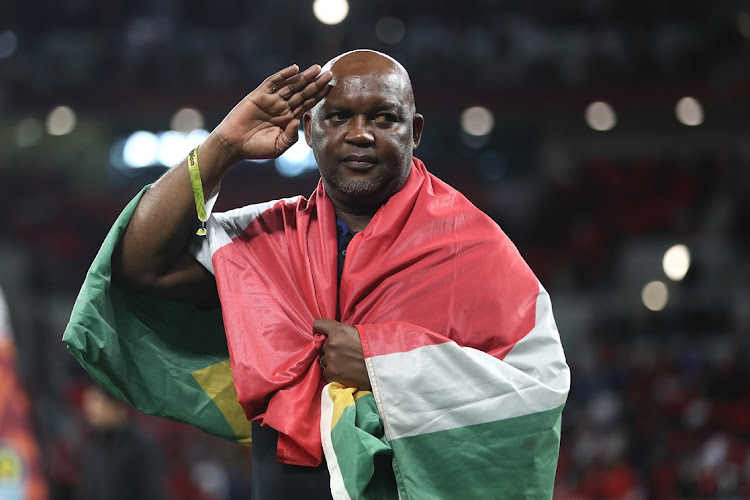 The New York Times has questioned why Al Ahly coach Pitso Mosimane was left off the Fifa shortlist for its Coach of the Year award for 2021 having won three international trophies in the period.

The story was headlined, “When two Champions Leagues titles in eight months don’t count”, and had the tagline, “Pitso Mosimane enjoyed a better 2021 than almost any coach in world soccer. Just don’t expect Fifa, or soccer, to notice”.

Mosimane also steered Ahly to third place at the Covid-19-delayed 2020 Fifa Club World Cup in Qatar in February 2021. The article notes that such an achievement is more notable given African teams come from a lesser-resourced background than their counterparts in Europe and South America.

“That it is the third place, not the string of firsts — two Champions Leagues accompanied by two African Super Cups — that Mosimane lingers on is instructive. It is a reminder that silver and gold are not the only measure of glory in management; achievement is necessarily relative to opportunity.

“Mosimane, by that gauge, has enjoyed a year that holds up in comparison to any of his peers. He has not, though, been granted the same recognition. When Fifa published its seven-member shortlist for its men’s coach of the year award a few weeks ago, Mosimane — who had lifted three continental honours in 2021 — was not on it.

“He was not the only notable omission. Abel Ferreira was not there either, despite going one better than Mosimane and leading Palmeiras to two Copa Libertadores titles in the same calendar year. He did not make the top seven, let alone the top three. Those spots were taken by Thomas Tuchel, Pep Guardiola and Roberto Mancini.

“The pattern held for the women’s prize too. Bev Priestman led Canada to an improbable Olympic gold in Tokyo, but she did not make the final cut, overlooked in favour of Lluís Cortés, Emma Hayes and Sarina Wiegman.

“The connection is not that all of these coaches won major honours: Cortés might have led Barcelona Femení to an emphatic treble and Hayes might have won the Women’s Super League, but Wiegman saw her Dutch team knocked out in the quarterfinals of the Olympics, then left to take charge of England. The link, instead, is that they all work in Europe.”

The article and interview with Mosimane delves at length into the Eurocentric nature of Fifa's awards and the challenges that face black African coaches getting jobs at clubs in Europe and globally.

“The temptation is to chalk this up to Fifa’s star-dazzled ineptitude and move along. The problem, though, is more deep-seated than that,” the article continues.

“Fifa chooses the initial shortlists of candidates for its Best Awards, and has a tendency to overlook anyone not competing in the most glamorous, most lucrative tournaments in the game.

“But, occasionally, one slips through. Djamel Belmadi of Algeria was nominated in 2019. So were River Plate’s Marcelo Gallardo and Ricardo Gareca, the Argentinian in charge of Peru's national team.

“That none went any further is not just to do with Fifa, but with the array of players, coaches, fans and journalists who command a vote on the awards. It is not only the game’s governing body that is in thrall to the famous faces and the glamorous names of the major leagues of Western Europe, but the game itself.”

Mosimane told the newspaper that with the Confederation of African Football (Caf) having only recently introduced a similar level coaching qualification to Europe's Pro Licence African coaches are on the back foot. The Caf course he enrolled in has taken three years to complete rather than the intended six months, and only partly due to the disruptions of Covid-19.

Meeting European coaches was the equivalent, Mosimane said, of “being asked to sit the exam but not being given the books to read”. And still some African coaches pass”.

“It is small wonder that Mosimane is convinced that if he was put in charge of Barcelona or Manchester City he would 'not do too badly'," the New York Times said.

“Part of that, he is adamant, is to do with the colour of his skin. He was pleased to see one of his former players, Bradley Carnell, appointed coach of St Louis City in Major League Soccer. He is proud to see another South African doing well.

A #MondayMotivation for sure 🙌🏾!
When @RorySmith reached out to us for an interview with Coach Pitso, we were sure that a great piece of writing would come out of this interaction.https://t.co/rVkrJvy5jF

“Carnell does not have a fraction of Mosimane’s experience. 'So maybe I could get a job in MLS then?' [Mosimane] said. He did not sound hopeful. Carnell, after all, is white.

Mosimane told the Times his ambition after Al Ahly might be to return to coaching at international level, adding, though, that the time was “not right” for a return to Bafana Bafana. He harbours ambitions of a breakthrough at club level in Europe despite the challenges, the article said.

Mosimane steered Ahly to a 2-0 win against RS Berkane to win the Covid-19-delayed 2020 Super Cup in May 2021, then the Cairo club beat Raja Casablanca on penalties to win the 2021 Super Cup in December.