Thandi Merafe released on free bail without being detained 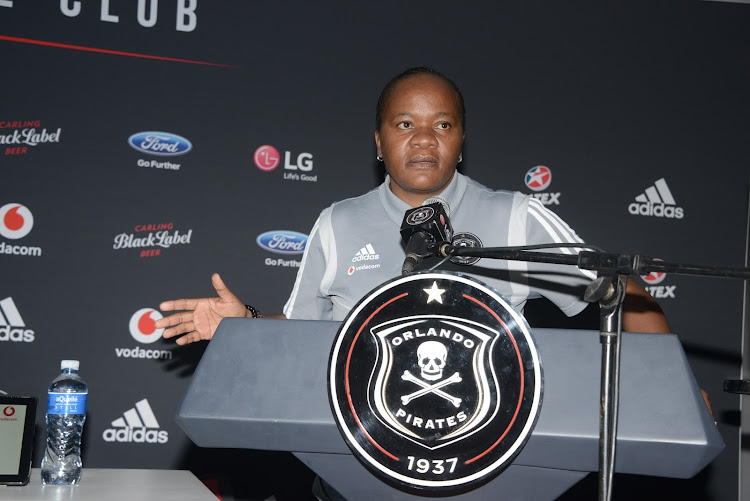 Orlando Pirates media officer Thandi Merafe will be prosecuted if it is decided that there is a case against her.
Image: Lefty Shivambu/Gallo Images

The common assault case opened by TS Galaxy media officer Minenhle Mkhize against his Orlando Pirates counterpart Thandi Merafe last month is set to be heard in court next Tuesday.

But there has been a twist after Pirates counterattacked with their security official pressing an assault case of his own against an unnamed Galaxy staffer.

TimesLIVE has been reliably informed that Merafe was arrested, charged and released on free bail without being detained after Mkhize laid a criminal charge against her with Orlando police in December last year.

Mkhize alleged that his colleague Merafe slapped him in the face in a heated scuffle before a 2-0 defeat to Pirates at Orlando Stadium in a match in which Galaxy owner and chairperson Tim Sukazi was controversially denied entry to the dressing rooms, despite his all-access accreditation card which allows him to do so.

“A case was opened, a suspect [Thandi Merafe] arrested and released at the same time as it was a common assault case, that’s all I can say,” said Nomvula Mbense from Orlando police.

“The docket will be taken to court on January 11 for a decision by prosecutors on whether to prosecute, call for further investigation or if there is no case that can be successfully prosecuted.”

Mkhize vowed last month that he wanted Merafe to be punished for her conduct and said that in a country ravaged by gender-based violence, the matter would have received more attention if the table were turned.

When approached for comment on Wednesday, Mkhize was coy on details.

“We will issue a statement as a club as soon as there are updates on the matter,” said Mkhize, “... But you can check with the police in Gauteng and I'm sure they can give you an update.”

TimesLIVE has established that a Pirates security official identified only as Eugene opened a similar case of assault against a member of the Galaxy entourage.

“Because the two matters are related there is a push to have them both heard on the same day (January 11),” said a source with intimate knowledge. “Apparently the Pirates guy has a J88.”

A J88 is a legal document generated by the department of justice that is completed by a medical doctor documenting injuries to a person in any circumstance where a legal investigation is to follow.

The document is acceptable in courts as the preferred method of establishing evidence in a criminal matter with regards to the injuries a complainant sustained.

Given that there is talk that the involved parties have apologised to each other, said the source,  the possibility of a prosecution is lessened, leaving prosecutors with an option to convince both parties to drop the matter.

“The Pirates guy opened a case this month if I am not mistaken. I forget the guy’s last name but he is well known as Eugene. It is not clear who Eugene alleges assault against.”

Pirates senior manager Floyd Mbele said he was “busy” when contacted for comment and asked to be sent a text.

Mbele, when told that a text had already been sent to him and read two hours earlier, said he would respond to it but had not at the time of publishing.