Tuchel admits Chelsea were lucky to win at Watford 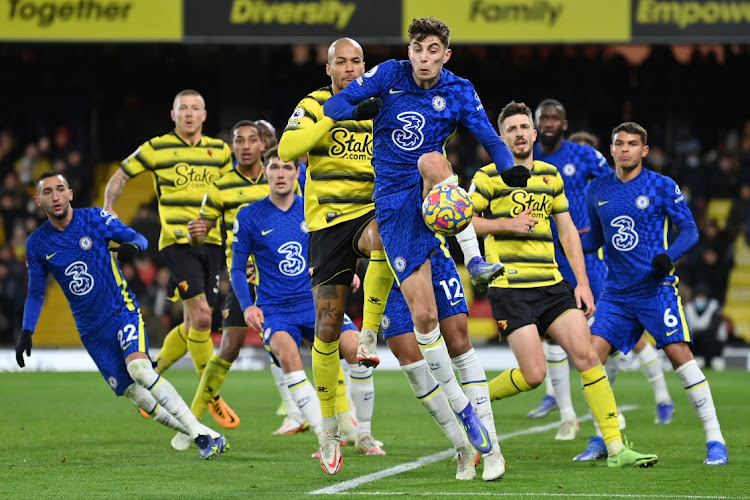 Kai Havertz of Chelsea clears the ball from a corner during the Premier League match against Watford at Vicarage Road on December 1, 2021 in Watford
Image: Justin Setterfield/Getty Images

Chelsea manager Thomas Tuchel admitted his side were fortunate to emerge with a 2-1 victory at Watford that kept them top of the Premier League on Wednesday.

With six changes to the side held at home by Manchester United at the weekend, Chelsea never got into their stride but goals by Mason Mount and Hakim Ziyech sealed the points.

Both came from well-worked moves, though they were an exception to the rule on a night when struggling Watford could easily have earned at least a point.

“We were lucky. We should admit it. Today we could not reach this level. We were not ready for this game. We are to blame. We never found the right attitude,” Tuchel said.

“It got better in the second half. We conceded a lot of chances in the first half and didn't create much. The two situations we had, we scored. We were lucky to escape with the win.”

Tuchel accepted some of the blame for his team's approach.

When the dust settles, however, Tuchel might look back on Wednesday as a vital victory in his attempt to keep ahead of Manchester City and Liverpool in the title race.

“We need a lot of points if we want to stay in the title race,” Tuchel said. “We felt like we lost two points against Burnley and Manchester United.

With another big game at West Ham United on Saturday, Tuchel has an injury worry over Reece James who missed the trip to Watford.

“I cannot say today. Yesterday he was in too much pain to travel. He got a kick on the ankle,” Tuchel said.

After a 32-minute suspension while a fan who had suffered a cardiac arrest was treated by emergency services, Chelsea took the lead when Mount coolly converted after a well-worked move in the 29th minute.

But Watford deservedly levelled before the break through Nigerian Emmanuel Dennis.

Ziyech came on for injured defender Trevoh Chalobah on the hour and struck the winner 12 minutes later with the outstanding Mount turning provider.

Chelsea lead the standings with 33 points from 14 games, with City on 32 and Liverpool on 31.

Claudio Ranieri's side will take heart from the way they pushed the league leaders but are just one place and three points above the relegation zone.

“We deserved at least a point but that's football,” former Chelsea boss Ranieri said. “I'm very satisfied with our performance. Sooner or later the points will arrive.”

Tuchel made six changes from the side that drew with Manchester United at the weekend and Chelsea looked disjointed for much of the evening.

Watford were the better team either side of the suspension but fell behind to Chelsea's first move of real quality.

The ball was played to Marcos Alonso down the left and he slipped it into Kai Havertz who shifted it across to the unmarked Mount who had time to pick his spot.

Watford responded well with Danny Rose testing Edouard Mendy with a powerful shot. Chelsea continued to stutter and when Ruben Loftus-Cheek lost possession in midfield, Moussa Sissoko powered forward and picked out Dennis whose shot took a deflection on its way past Edouard Mendy.

The hosts could have been ahead with Mendy making a fine save and Sissoko scuffing a decent opportunity.

Watford continued to look a threat in the second half but Chelsea gradually began to assert some control and the quality they have on their bench eventually told as Ziyech came on to secure the points with his first league goal of the season.

Mount, Chelsea's best player, was played into space down the left and his precise low cross was met by Ziyech whose powerful first-time shot beat Watford keeper Daniel Bachmann for pace. — Reuters