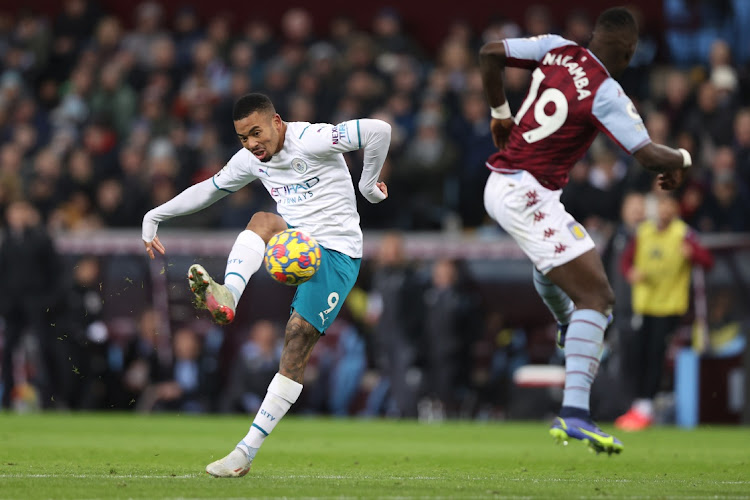 Pep Guardiola's Manchester City side will not be taking their foot off the gas in the Premier League title race after a hard-fought 2-1 win against Aston Villa left them breathing down the necks of leaders Chelsea.

“So we are going to face the challenge,” Guardiola told Amazon Prime of their bid to retain their title as City stayed a point behind Chelsea thanks to brilliant goals from Portuguese compatriots Ruben Dias and Bernardo Silva.

Guardiola, who celebrated his 150th Premier League win with City in 204 games, praised his side as they held off a spirited Villa fightback in the second half after Ollie Watkins pulled one back for the home side.

He also praised the scorers and added he hoped to have several injured regulars back in the fold quickly.

“The game we played was fantastic,” Guardiola said. “Difficult game. We knew it. I understand why. Especially after conceding early in the second half, the way we reacted ... we played really well.

“He (Silva) scored a fantastic goal. He is a player on another level. Ruben has good personalities and he scored a good goal.”

“Hopefully they (the injured players) come back soon. The doctor came to me and said 'this guy, this guy and this guy can't travel' so I say 'OK. Bring players from the academy and we go with them.'”

Guardiola's counterpart Steven Gerrard applauded Villa's effort and conceded his team's were overawed by City's superior display in the opening half.

“The second-half performance was really good,” Gerrard told the BBC. “It maybe deserved that we take something from the game. We lacked a bit of belief at the start of the first half.

“That is a combination of them having top players and manager. We got a foothold and then conceded. The second goal we could have stopped the game higher up the pitch. The reaction I got, I can't ask for more.”

City dominated the opening half and twice went close early on as Villa goalkeeper Emiliano Martinez parried fierce shots by Joao Cancelo and Rodri, with the home side barely able to break out of their own half.

The visitors took a 27th-minute lead through Dias, when the Portugal centre back beat Martinez with a slightly deflected first-time shot from 20 metres after Raheem Sterling's cutback flashed across the penalty area.

If there was an element of luck involved in the opening goal, the second was sheer class as City broke away under pressure in their own penalty area and struck at the other end in a matter of seconds.

Cancelo threaded a short pass to Riyad Mahrez past two Villa forwards and the Algerian released Jesus on the right flank, with the striker lifting a cross for Silva to crash an unstoppable volley into the roof of the net.

Down but not out, Villa sprang back to life shortly after the break as Watkins found space in a crowded penalty area to drive in a half-volley inside the near post from 10 metres after he met a low Douglas Luiz corner.

The home side missed a gilt-edged chance to salvage a draw in the 75th minute when City keeper Ederson parried a sitter from substitute Carney Chukwuemeka and the visitors held on in the closing stages.

Dias was happy City were able to survive Villa's late onslaught and described Silva's goal as a morale-boosting moment.

“Very important win today against a team that are on fire under a new manager,” Dias told Amazon Prime. “Very important to get the three points. Everyone fight a lot and we are very happy.

“Bernardo gave us a little bit of extra confidence into the second half. We have to give them credit for a good goal that changed the game. With the crowd they tried to make things different but our team was always in control.” — Reuters