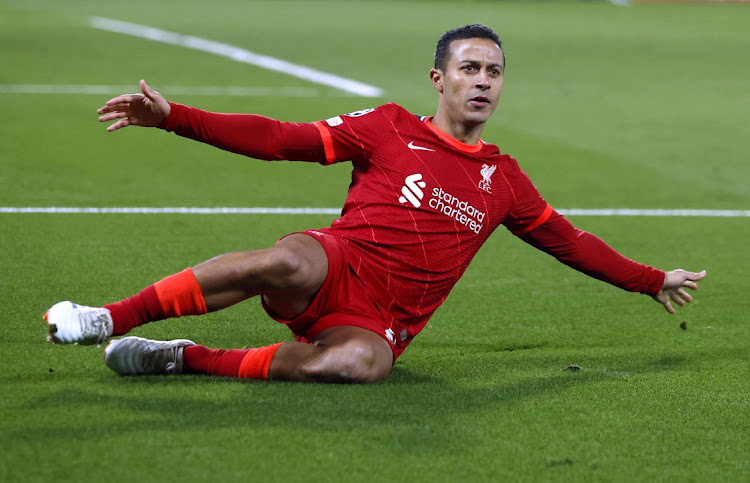 Liverpool manager Juergen Klopp hailed Thiago Alcantara's second-half “thunderball” that sparked his team to life against Porto on Wednesday and set them on their way to a 2-0 Champions League win.

With qualification to the last 16 stage already secured, a below-strength Liverpool side struggled in the first half before taking the lead through Thiago's stunning low strike in the 52nd minute.

Mohamed Salah's clinical finish made it 2-0 at Anfield with 20 minutes left.

“We had bigger chances than that in the game, but we scored with that situation because it was just an incredible goal,” Klopp said.

“Whoever sees Thiago in training knows he has the technique to do it, but even with this technique it doesn't happen constantly that he can fire such a thunderball. It was good timing, to be honest.

“We needed some luck. (Porto) came through and had some big chances but didn't score ... We scored twice and controlled the game in the second half much better. So, I'm really pleased about the performance.”

Porto coach Sergio Conceicao rued his side's poor finishing but said he always thought their fate would be decided in the last group game at home to Atletico Madrid.

Conceicao was furious at times in the opening 45 minutes as his side carved out several opportunities, the best falling to Otavio who sliced a glorious chance horribly wide.

Liverpool then struck twice after the break through Thiago's stunning strike and Salah's sixth goal in Group B which they lead with a maximum 15 points from five games, 10 ahead of second-placed Porto.

Milan's 1-0 win at Atletico Madrid limited the damage to Porto's hopes of reaching the last 16 and a win at home to Atletico on December 7 will see them progress as runners-up.

“We probably had the best of the first half, we created three or four chances and defensively we were disciplined,” Conceicao said.

“But then the individual quality of Liverpool players and our lack of offensive effectiveness made the difference. We were not efficient enough tonight.

“But I always said that the group would be decided in the final game and we can still get to the round of 16.”

While Porto are sweating on finishing as runners-up, Liverpool are one of three clubs going into the last round of group games with maximum points and finishing with a 100% record will focus minds in Milan.

“It would be good to go through with all wins to take forward into the competition,” Alex Oxlade-Chamberlain said.

“Everyone dreams of playing at the San Siro in the Champions League, away at Milan and that is what we are here to do.”

Liverpool may well field some of their fringe players in Milan, as they did on Wednesday when midfielder Tyler Morton was handed his Champions League debut.

“People might be surprised with Tyler Morton but he did exceptionally well,” manager Jurgen Klopp said.

“He is a good player and really pleased for him that he put a performance in like this.”

Liverpool, third in the Premier League with 25 points from 12 games, host 13th-placed Southampton on Saturday. — Reuters