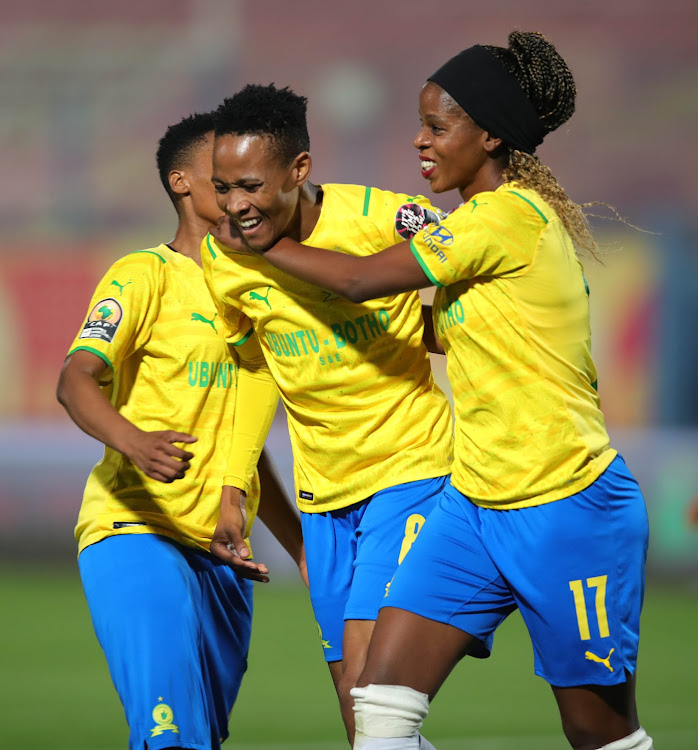 Mamelodi Sundowns Ladies players celebrate one of the two goals they scored against Ghanaian side Hasaacas Ladies during the Caf Womens' Champions League final in Cairo on Friday.
Image: CafOnline

Mamelodi Sundowns Ladies were crowned inaugural Caf Women’s Champions League winners after their 2-0 win over Hasaacas Ladies of Ghana at the 30 June Stadium in Cairo on Friday night.

Sundowns Ladies have matched the notable feat that was achieved by their male counterparts who won the Caf Champions League in 2016 under former coach Pitso Mosimane.

Sundowns Ladies secured this victory through a goal in each half by attackers Chuene Morifi and Andisiwe Mgcoyi, who was named the woman of the match, as they became the first team to lift this trophy.

There were few notable chances during the opening exchanges as most of the action was in the midfield where Melinda Kgadiete, Lelona Daweti and Lerato Kgasago operated for Sundowns.

The likes of Kgadiete, Daweti and Kgasago did not have it all their way as Faustina Aidoo, Evelyn Badu and Doris Boaduwaa proved to be tough competition in the midfield battle.

On occasions they found themselves in the Sundowns danger area, Hasaacas Ladies threatened through Rahama Jafaru, Veronica Appiah and Antwi Regina but they could not beat Sundowns goalkeeper Andile Dlamini.

Sundowns Ladies opened the scoring after 32 minutes through a close range effort of Morifi who kissed the net after she connected with a well-taken cross from Mgcoyi.

Early in the second half, Daweti thought she had increased the lead for Sundowns but she watched in disbelief when her close range shot flew wide of the upright with Buoadu beaten.

The Brazilians Ladies secured this match after 64 minutes when Mgcoyi, who supplied for the opening goal, turned finisher after she was released by a defence-splitting pass from Nonhlanhla Mthandi.

In the closing stages, Dlamini produced a stunning diving save to deny Pepertual Agyekum from a free-kick that was taken outside the penalty box as Hasaacas Ladies tried to get back in the game.

There was drama at the death when Sundowns substitute Regina Mogolola saw red for a dangerous tackle on Aidoo but it did not matter much as Sundowns Ladies had already secured this match.