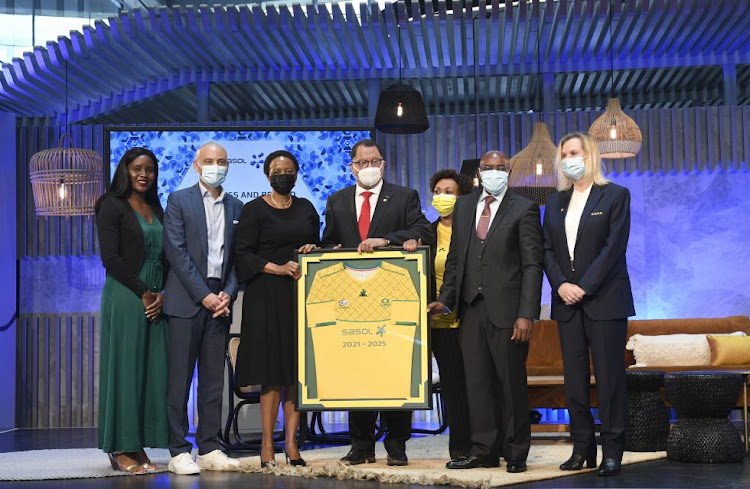 In what is the longest running women’s football sponsorship in the country since 2009, Sasol will continue their relationship with the South African Football Association (SAFA) for a further four years.

“It is an honour that for 12 years already Sasol has been at the forefront of women’s football development in South Africa,” said Sasol executive vice president of Human Resources and Stakeholder Relations Charlotte Mokoena.

“Our partnership with SAFA has enabled us to play a pivotal role in breaking down gender barriers in sport to empower young women. Since 2009, we have held the privilege of being the first and sole headline sponsor of Sasol Banyana Banyana.

“Through the Sasol Women’s League, established in the same year, we provide a robust platform to develop and nurture grassroots talent. Our role in women’s football is a shining example of our purpose in action.

“A purpose we will live up to as we continue to play our part in advancing the interests and developmental needs of women, not just in sports, but also in business and society, in our communities and beyond.

“We are not just a sponsor, we are partner in the development and growth of women’s football. I would like to thank SAFA for their partnership and for supporting Sasol in realising our goal of enabling transformation and contributing towards greater parity for women athletes.

“As we formally cement the extension of our partnership, we look forward to working together to continue to raise the standard of women’s football and to reach even greater milestones, under our “#Limitless and Beyond” campaign,” concluded Mokoena.

The mandate of the partnership since 2009 has always been to develop and promote women’s football and there have been milestones like Banyana Banyana’s maiden appearance at the FIFA Women’s World Cup in France in 2019.

The company was also there when Banyana Banyana won the COSAFA Women’s Championship four times in a row in 2017, 2018, 2019 and 2020 and this has helped a number of players moving overseas.

“Banyana Banyana have become a global player and it is all thanks to Sasol. Without their support, we would not have made such significant gains and strides in women’s football.

“This team has faced some of the best footballing nations like the world number one ranked team the USA and not many can claim to have been invited to play them. On our list we have played Chile, the Netherlands, Sweden, Jamaica and we will forever be grateful to Sasol,” said SAFA president Danny Jordaan.

“This partnership was born with development in mind and Sasol has put their money where their mouths are as our flagship league, the Sasol League, continues to offer opportunities and produce players that are sought after.

“Not only by the teams in the Hollywoodbets Super League but also across all national teams. The investment made by Sasol back in 2009 has borne a lot of fruit for all to see. The backing has helped players to pursue both a playing career and education at the same time, and this has changed many a life of the players.”

There are currently over 4000 active female footballers in the country, something that was in short supply before the dawn of the partnership with Sasol.

The extension of the partnership also comes at a time when Banyana Banyana are embarking on the journey to qualify for the 2022 Africa Women’s Cup of Nations (AWCON) in Morocco in July.

The AWCON will also double up as the African qualifiers for the 2023 FIFA Women’s World Cup which will be hosted by Australia and New Zealand.

Only the four teams from AWCON will qualify for the World Cup, with two more teams advancing to the inter-confederational play-offs.