Do or die for Banyana Banyana 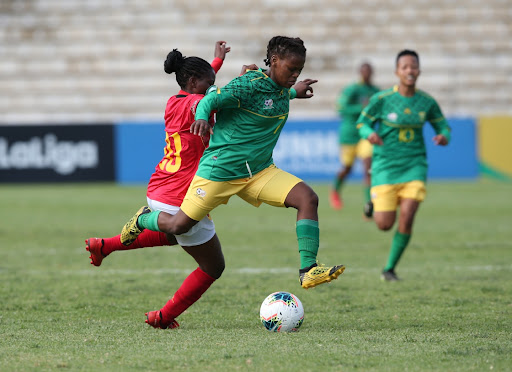 TAKING OFF: Noxolo Cesane of SA in action during the Cosafa Women’s Championship match against Angola at the Madibaz Stadium on Friday
Image: RICHARD HUGGARD/ GALLO IMAGES

Competition favourites and defending champions Banyana Banyana have one final chance to book themselves a spot in the semifinals of the Cosafa Women’s Championship and they need to beat Mozambique on Monday to achieve that goal.

This last group fixture will be played at the Nelson Mandela Bay Stadium (3.30pm).

The SA women’s senior team played to a goalless draw against a stubborn and aggressive Angola at the Madibaz Stadium on Friday.

A win against Angola would have eased some pressure on them going into the last round.

Banyana head coach Desiree Ellis said her players needed to be up for it against a highly motivated Mozambique side.

“We haven’t played the best football that we can and we have to make sure we really bring our A game this time,” she said.

“We are all disappointed because we know we can be better and we have to be better against Mozambique because they have shown they are very spirited as well.

“They have picked up a draw and a loss.

“Everyone is still in it, so it’s in our hands and it’s there for us to take, but we have to be way better then we were.”

Reflecting on Friday’s game against Angola, Ellis said she was disappointed with the result and also in her team’s performance.

“We can’t just play one half.

“We created a lot of opportunities as well, but I felt our entries into the final third were really poor. Our decision-making was poor too.”

She said Angola had been determined and Banyana had played right straight into their hands.

“They were spirited, they defended very well and they put their bodies on the line.

“I am not sure, but I thought we could have got a penalty or two, but we can’t rely on those decisions.

“We have to make sure we do our work and get the ball in the back of the net.

“We did have one or two chances  and we were not clinical, but we will continue working and make sure we get ready for the next game because now the next game is a final.

“We haven’t been in this position for a long time where there is so much pressure to win the last game, but now players have to stand up and be counted,” the coach said.