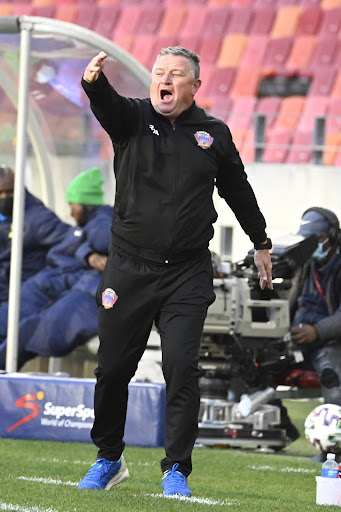 GO BOYS: Chippa United coach Gavin Hunt is proud of his players despite the loss against  Royal AM
Image: DERYCK FOSTER/ BACKPAGEPIX

Chippa United coach Gavin Hunt applauded his players’ performance despite losing 1-0 to DStv Premiership rookies Royal AM at the Chatsworth Stadium in Durban on Sunday.

Hunt, who is still building what he says will be a competitive Chilli Boys outfit, looked on as his team suffered its first defeat in the league season.

This after the side secured a win and a draw in their first two outings.

Chippa will have to recover quickly from this setback as they prepare for their next match against Soweto giants Orlando Pirates at the Nelson Mandela Bay Stadium on Saturday (3pm).

The Gqeberha side began their league campaign on a high note with a 1-0 win against league debutants Sekhukhune United and that result was followed by a goalless draw against league defending champions Mamelodi Sundowns.

Coming back from the two-week Fifa break, Hunt was hoping that his boys would pick up from the positive results going into the Royal AM fixture, but that was not the case.

Victor Letsoalo scored the only goal of the match from the penalty spot and handed Royal, who bought the Premier Division status of Bloemfontein Celtic, their first league victory this season.

The former Bidvest Wits and Kaizer Chiefs mentor said: “I think we deserved more but we did not get it.

“I am proud of the players, I think they worked their socks off but there was a little bit of naivete now and then, especially in the first half.

“I thought at times we played OK, but it’s just that final ball.

“Obviously, we are lacking in certain areas but we will keep grinding away, but I think we should have got much more from the game.

“But when you come here these things are going to happen,” Hunt said.