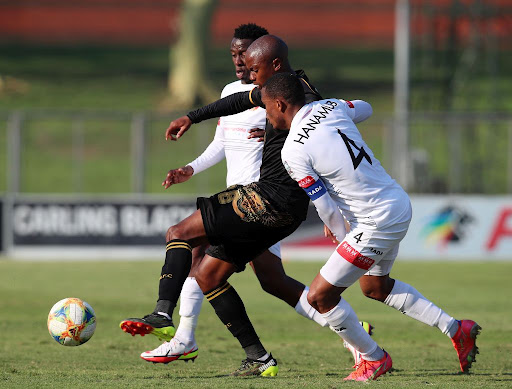 Levy Mashiane of Royal AM challenged by Riaan Hanamub and Maloisane Mokhele of Chippa United during the DStv Premiership match between Royal AM and Chippa United at Chatsworth Stadium on September 12, 2021 in Durban, South Africa.
Image: Muzi Ntombela/BackpagePix/Gallo Images

Newcomers Royal AM finally won their first match in the premiership when they beat Chippa United to hand the Gqberha side their maiden defeat of the campaign at Chatsworth stadium on Sunday afternoon.

Victor Letsoalo scored the only goal of the match from the penalty spot and it was worth its weight in gold as Royal, who bought the Premier Division status of Bloemfontein Celtic to ascend to the top-flight, were yet to win a game in the league before Sunday.

Referee Christopher Kistoor judged Roscoe Petersen to have handled the ball inside the area in the 48th minute and after consulting with his assistant, he pointed to the spot and signalled a penalty.

Letsoalo made no mistake and beat Rashid Watenga with a shot that sent the Chippa goalkeeper the wrong way.

It was a first defeat of the season for Chippa and coach Gavin Hunt will have plenty to think about in the coming days.