Bafana get job done against Ghana 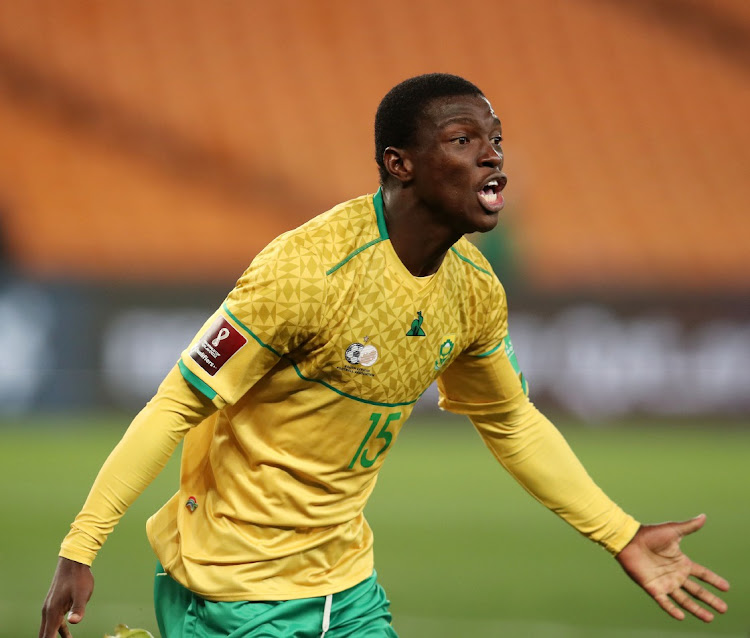 Bongokuhle Hlongwane of South Africa celebrates his goal against Ghana in the World Cup Qualifier on September 6, 2021 at the FNB Stadium, Johannesburg
Image: Muzi Ntombela/BackpagePix

Bafana Bafana made heavy weather of disposing Ghana and needed a late lone strike from Bongokuhle Hlongwane to finally ease past the West Africans in a 2022 World Cup qualifier they should have won comfortably at FNB Stadium on Monday night.

Ghana were there for the taking for long periods on this warm evening, but Bafana somehow contrived to miss a litany of opportunities that would have wrapped up this outing in a neat little bow long before Hlongwane bundled the ball past second half substitute goalkeeper Lawrence Ati-Zigi to score in the 82nd minute.

The home side created the more clear-cut opportunities and coach Hugo Broos' charges unnecessarily made things very difficult for themselves, with Ghana inviting trouble on numerous occasions.

Bafana had numerous opportunities in both halves to win the game comfortably and as full-time approached, the nation's soccer lovers would have been forgiven for fearing that if the team would once again be made to rue the many chances they spurned as they have done on a number of occasions in the past.

The relief on Broos' face was understandable when Zambia referee Kasokota Kafuli signalled the final whistle and as the Belgian will be the first to admit, the final score should not have been a last-gasp 1-0 win.

Bafana started the match with two changes for the starting XI that drew 0-0 with Zimbabwe in the first qualifier on Friday and Broos introduced Ethan Brooks and Hlongwane in place of Gift Links and Luther Singh.

The visitors had the better of the early changes and it seemed the South Africans were giving the Black Stars far too much respect in the first few minutes of this World Cup qualifier. Sensing that their hosts were a little hesitant in those maiden moments of the match, Ghana suddenly threatened through Joel Fameyeh after he received a brilliant pass from Abdul Fatawu Mohammed only three minutes into the encounter.

The troublesome Fameyeh tried to shake off his marker Rushine de Reuck, but the Bafana defender resorted to committing a foul in a bid to prevent him from having a clear path to goalkeeper and captain Ronwen Williams' goal.

De Reuck earned a yellow card for his trouble after Zambia referee Kafuli ruled that he had impeded Fameyeh.

The early caution was a signal of what was to come as Kafuli would spend the better part of the match trying to regain control and impose himself on the proceedings.

Bafana eventually settled down as the match progressed and started to ask questions of the visitors. But the tackles kept on flying in as Kafuli struggled to exert his authority. Fameyeh cluttered into Teboho Mokoena in the 33rd minute and also earned a yellow card for his trouble.

Tau had the ball in the back of the net in the 37th minute and beat Ghana goalkeeper Richard Ofori with a superb header, but Kafuli and his assistants ruled that the Al Ahly striker was offside. Television replays  showed that the Zambian match officials blundered as Tau was not offside when the cross was delivered from the other side of the pitch.

Tau's erroneously disallowed goal was the best opportunity of the first half and the two sides went to the halftime break still tied at 0-0.

Bafana should have gone into the lead immediately after the restart, but Evidence Makgopa somehow contrived to miss in front of an open net.

Ofori was well beaten and did not know much about the fine delivery from Mokoena that slipped between his legs and rolled kindly in Makgopa's path.

But the Baroka player somehow missed when it seemed scoring would have been the easier option.

It would take Hlongwane's late goal to finally wrap up all the points and enable Bafana to draw level with Ghana onn Group G with four points.

The World Cup qualifiers resume in October when Bafana will play home and away back-to-back qualifiers and Ethiopia.