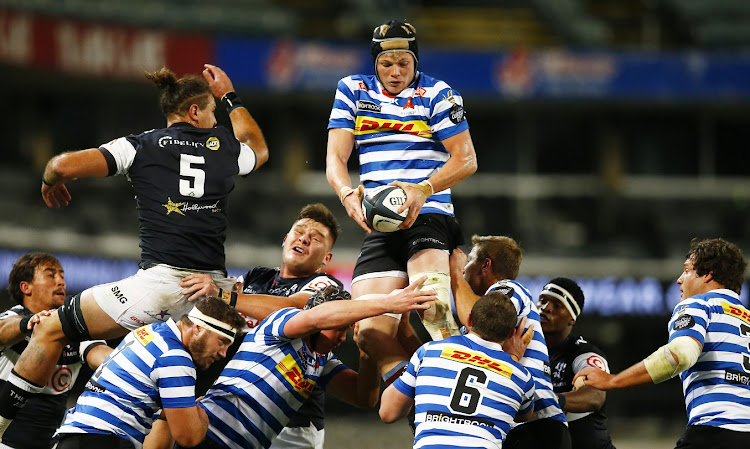 Johan du Toit of Western Province during the Currie Cup match against the Sharks at Kings Park in Durban on August 28, 2021.
Image: Steve Haag/Gallo Images

Western Province snuck into the semifinals of the Currie Cup where they will visit the Bulls at Loftus on Saturday.

They did it the hard way, as their hard fought 35-24 victory over the Sharks at Kings Park on Saturday was only secured through two late tries by JJ Kotze and Edwill van der Merwe.

Province, who went into this match sitting in fifth spot behind the Pumas, needed to beat the Sharks by 24 points or win by a bonus point, and John Dobson’s men achieved their mission.

This result also eliminated the Pumas from the running for a place in the knockout stages, and it also confirmed that the Sharks will host the Griquas in the other semifinal in Durban at the weekend.

Kotze and Van der Merwe stole the late show but Western Province had other standout performers in the form of Dan du Plessis, who scored two early tries, and their ever-reliable kicker Tim Swiel, who put away all his five conversions.

In-between Du Plessis’s early brace of tries earlier in the match the Sharks registered their name on the scoresheet from the boot of reliable kicker Curwin Bosch.

Province went into slumber-land and were duly punished by their hosts who registered their first try through Yaw Penxe touching down in the corner after 20 minutes.

Penxe’s try sparked life into the work of the Sharks as a few minutes later they went in front for the first time in the game just after the half-hour mark through the effort of Phepsi Buthelezi.

Buthelezi, threatening with his darting runs, received Sanele Nohamba making good metres before offloading to Buthelezi to touch down, leaving Bosch with an easy job of converting in front of the poles.

Western Province started the second half on the front foot and regained their lead after five minutes since they returned to the field when Paul de Wet dived over the line for their third try of the afternoon.

Swiel, who was having a good game with the boot, did not disappoint with his conversion as the visitors took a four-point lead and still in the hunt for a place in the knockout stages of this competition.

The Sharks gave themselves an advantage 10 minutes from time when Penxe registered his second try of the match but Province replied almost immediately with JJ Kotze’s try that earned them the crucial bonus-point.

Western Province sealed the deal with Van der Merwe’s try after the hooter.

* In other matches played on Saturday afternoon, the Bulls ended the round robin stages of the competition on top of the log after a narrow 39-36 win over the Cheetahs at Loftus.

The Cheetahs’ tries came from a penalty try and the efforts of Mihlali Mosi, Duncan Saal, Cohen Jasper and Malcolm Jaer, as veteran kicker Ruan Pienaar scored three conversions and a penalty.

In the other match of the afternoon, Griquas booked their place semifinals against the Sharks after fighting back to claim a 13-13 draw against the Pumas in Kimberley.

Griquas scored one try from Chris Hollis with George Whitehead putting away one conversation and two penalties. The Pumas scored two unconverted tries from Tapiwa Mafura and Sebastian de Klerk and a penalty by Eddie Fouche.