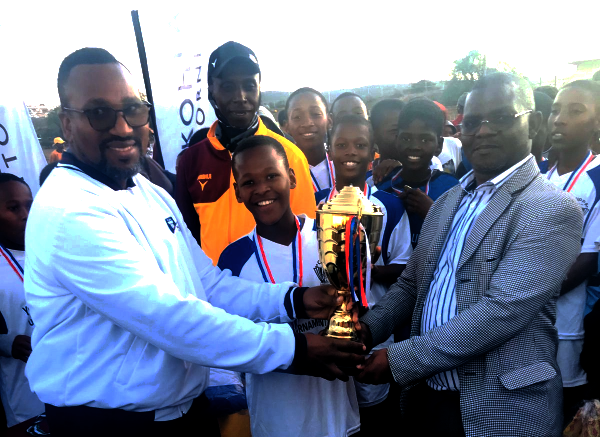 IN THE BAG: Themba Nkohla, from Nkohla Attorneys, and Nodefa president Mthuthuzeli Calata hand over the U13 trophy to Highland Spurs captain Milani Mabambo
Image: Supplied

Cango Chiefs and Highland Spurs were crowned the champions of the Nodefa U13 and U15 inaugural Nkohla Attorneys Youth Tournament at the Jabavu Stadium in Kariega at the weekend.

Chiefs beat Uitenhage Black Aces 4-3 on penalties in the quarterfinals of the U13 competition to progress to the next round after the match ended in a goalless draw.

A 2-0 scoreline against Shooting Stars in the semifinals was enough to see Chiefs book themselves a spot in the finals, where they beat Young Ideas 1-0 to become the U13 champs.

Meanwhile, the U15 tournament saw Highland Spurs kick off their winning spree with a 2-0 victory against Shooting Stars, followed by a 2-1 semifinal win over Jamaican Stars.

Spurs overcame Cango Chiefs 5-3 on penalties after the final ended in a goalless draw to take the trophy.

The youth tournament will be played annually and is aimed at developing future professional and Bafana Bafana players.