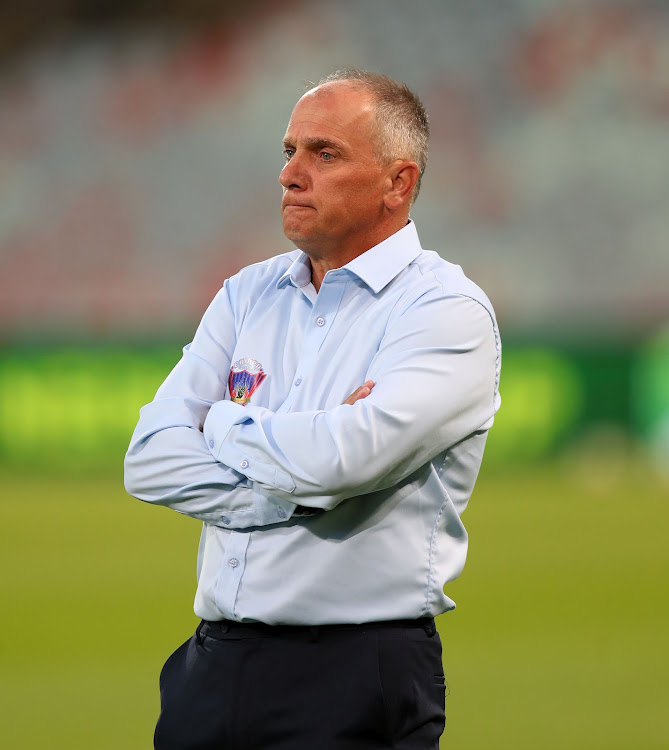 MOVING ON: Chippa United coach Vladislav Heric says his players have to quickly get over the cup final disappointment and prepare for the next challenge.
Image: BACKPAGEPIX/ MUZI NTOMBELA

Chippa United coach Vladislav Heric will have to pick up the pieces and revive his players’ spirit pretty quickly after the team’s dream of Nedbank Cup glory was shattered on Saturday evening.

The Eastern Cape side slipped to a 1-0 defeat at the hands of TTM in the final played at the Free State Stadium in Bloemfontein.

It was billed a “Cinderella” final as both sides had never before reached a cup final in the elite league but it was TTM who were royally crowned on the night.

With the real threat of relegation still hanging over their heads, the Chilli Boys will have to put their cup final nightmare behind them, dust themselves off and put all their emphasis on saving the club’s status in their last four matches.

They are 15th on the log with 24 points from 26 matches and Heric believes the only way to heal their cup final heartache is to avoid the big drop.

“We have to focus on the relegation campaign and try to keep ourselves in the premiership. That is the only way we get over this,”  the 54-year-old Serbian coach said.

“I want us to play like we played in the second half.  After making some corrections I believe we can create the chances, but now the main obstacle will be to motivate the players to carry on fighting.

“I will find a way to get out of the relegation zone. I believe in my players even though we lost the final.

“I am still behind them. I am taking all these mistakes that they made and I am 100% behind the success of the club in the future.”

The only goal of the game came in the 27th minute when Ndabayithethwa Ndlondlo’s effort took a deflection off the head of Chippa captain Frederic Nsabiyumva and sailed into the corner of the net, beating goalkeeper Ismail Watenga quite comfortably.

Reflecting on the loss, the coach said: “We tried to approach this game like any other game without the pressure, but unfortunately in the first half-an-hour we didn’t exist; we couldn’t move; we were like enchanted.

“In the last 15 minutes of the first half we started to play and we started to recover from the shock of the goal that we had conceded.

“So in the first half there were no chances from both sides and then we got this cracker against us and  we were shocked.

“Second half we were a different team and we looked more organised. We moved around more but we couldn’t penetrate and we could not create chances.

“The one or two that we did create were not enough for us to recover in the game.

“It’s sad for those [players] who worked hard to be in the final and now to lose it.”

Chippa’s next league fixture is against fellow relegation candidates Black Leopards at the Nelson Mandela Bay Stadium on Wednesday (3pm).