Sundowns coach Mokwena: ‘Pressure of chasing far worse than being on top’ 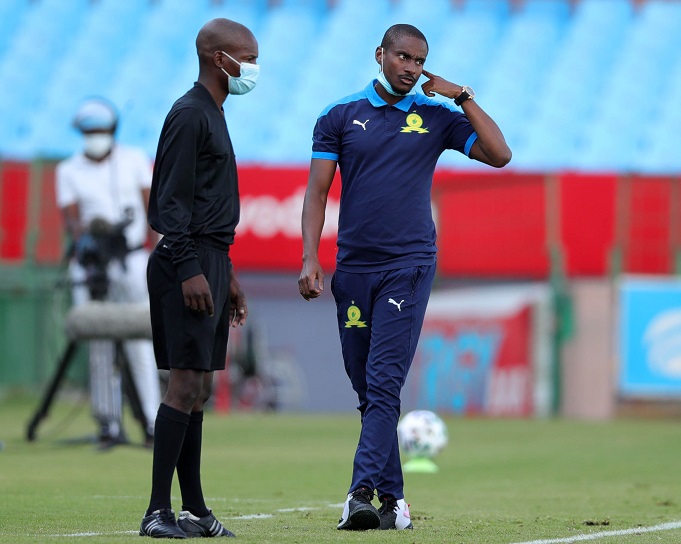 Mamelodi Sundowns co-coach Rulani Mokwena says the pressure of chasing in the DStv Premiership is worse than the pressure of leading it.
Image: Samuel Shivambu/BackpagePix/Gallo Images

Mamelodi Sundowns have gone through their last four matches in all competitions without a win but coach Rulani Mokwena says there is no need to press panic buttons as they know how to handle the pressure of the championship run-in.

During this four-match period over the past 11 days the Brazilians were dumped out of the Nedbank Cup by Tshakhuma Tsha Madzivhandila (TTM) and only managed two points from a possible nine in the league.

The two draws to fellow title chasers Golden Arrows and AmaZulu and surprise loss to Kaizer Chiefs have seen their lead at the top narrowed to one point but they have two games in hand.

“Mamelodi Sundowns players have been here before, they know how to deal with this type of hardship,” Mokwena said as they prepared for a the big clash with Orlando Pirates at Orlando Stadium on Sunday.

“We knew this was going to happen. Man City went through difficult moments at the beginning of the season and then they caught a bit of momentum. Liverpool, Real Madrid and Barcelona went through the same, so it happens and there is no perfect season.

“We will be very naive to think that we will have a perfect season where we were 21 games unbeaten in the domestic league. Because of the season being difficult and strange as it is, the difficulties that come along only prepare us to try and navigate our way through and get to the finish line as safely as possible because of the responsibility that we have as Sundowns.

“I would think that not having won in four matches is affecting the players — I would be worried of it was not. We have honest football players and they are in touch with reality, our players are not happy when they don’t win football matches.

“You could sense in the change room, I don’t know which feeling was worse between losing to Chiefs and drawing to AmaZulu — you could see the disappointment in relation to the results.”

Over the past few years, Sundowns mostly had to chase other teams in the title run-in but this year things are different as they are being chased and Mokwena said there is more pressure in chasing than being on top.

“If you ask me now which position I would like to be in, my answer will be I would like to be number one and at this point in time we have our own destiny within our control. We are in control of our own situation and no-one else.”