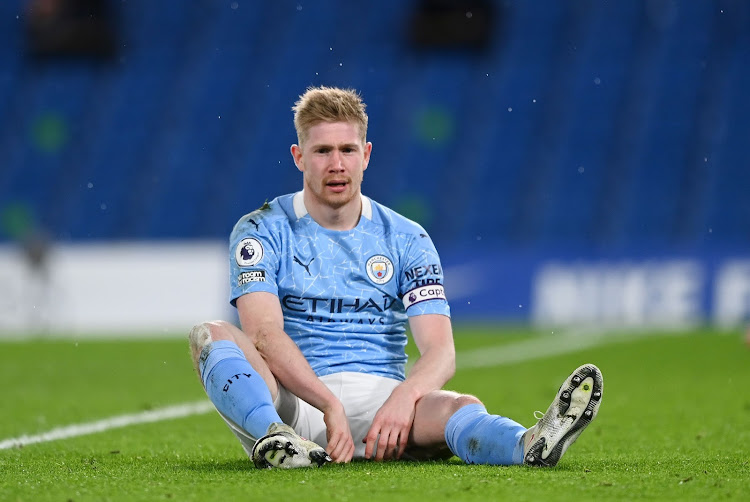 Manchester City's Kevin de Bruyne could be fit for next week's Champions League semi-final first leg against Paris St Germain as the Belgian midfielder's foot and ankle injury is not as bad as first feared, said manager Pep Guardiola.

Guardiola said it was too soon to make a call on de Bruyne's availability for Sunday's League Cup final against Tottenham Hotspur but hoped to have the 29-year-old available for the trip to Paris next Wednesday.

"It was less than we expected and yesterday he felt much better," Guardiola said after Wednesday's game. "Today I don't know because I didn't speak with him, but we will see tomorrow's training.

"I think if not for this final ... maybe he will be ready for the semi-finals of the Champions League."

Goals from Phil Foden and Rodri cancelled out Villa's early opener and took City 11 points clear of second-placed Manchester United, who have played a game less. City are now three wins away from a third Premier League title in four years.

The victory came after days of tumult over the proposed breakaway European Super League, with City one of six English clubs who had signed up to it.

The ill-fated proposal, which was announced on Sunday, collapsed amid intense backlash from fans, players and governments, alongside threats of bans and sanctions from the game's European and world governing bodies UEFA and FIFA.

Guardiola said the Super League was now a "closed chapter".

"As a club we accept, learn and focus on the reason why we're here," he said. "It's a chapter which is over, a closed chapter. They (the owners) don't need to apologise, I know them, I know how they are."

Captain Fernandinho saying that football won out as the project quickly fell apart.

"It's been crazy since Saturday after the Chelsea defeat in the FA Cup. Guys were a bit down, and then on Monday the Super League comes out and we were surprised," Brazilian Fernandinho told Sky Sports.

"We didn't expect it, but eventually they had good sense and it was the right thing to do. Everyone who loves football didn't support the Super League, including our players, so we're happy now that it’s turned around, but it was a surprise," he added.

Players and managers were seemingly left in the dark as plans were made for teams from England, Spain and Italy to create a new tournament to replace UEFA's Champions League with an eye to generating more revenue.

Many players took to social media on Tuesday evening to express their displeasure as pressure from fans mounted, prompting a U-turn from the English clubs.

"It's a tough situation. We wanted to find out from the people at the top of the club to see the reasons why they are there with the other clubs," the 35-year-old Fernandinho said.

"We wanted to come out and say we are against it, but we had to have a chat among the players and we all agreed to wait for the club statement, we are happy in the end because football wins," Fernandinho added.