Chippa crash to defeat at home 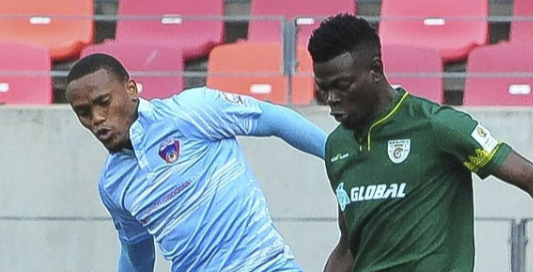 Chippa United have slipped further into the relegation zone after slumping to a 1-0 defeat at the hands of Baroka FC in their DStv Premiership clash at the Nelson Mandela Bay Stadium on Tuesday.

A howler from Chippa goalkeeper Rashid Watenga in the first half saw the home team extend their winless streak to 10 matches.

By contrast, the win saw Baroka move to eighth position on the log, while the Chilli Boys are stuck in 15th position after 23 games.

Chippa went into the game oozing confidence after their 1-0 win against GladAfrica Championship side Pretoria Callies in the Nedbank Cup semifinals on Saturday.

The win saw the Gqeberha side book themselves a spot in the final of the Cup competition, a historical moment for Chippa as it will be their first Cup final in the PSL.

Coach Siyabulela Gwambi had hoped his troops would take the same fighting spirit and drive into their league fixture against Bakgakga.

However, that was not the case on match day.

Both sides had equal opportunities on goal in the first half, but it was Watenga's mistake just four minutes before halftime which saw Baroka go into the break with a 1-0 lead.

Chippa’s goalkeeper received a pass from Sandile Mthethwa to clear, but the Ugandan mistakenly  gave the ball to 21-year-old midfielder Goodman Mosele to score his first league goal for Baroka.

The Chilli Boys switched to attacking mode in the second half in a desperate attempt to level the score line.

Baroka in return made sure to tighten up their  backline as they absorbed the pressure put on them by Chippa.

Chippa had a chance to equalise in the 73rd minute, but Gregory Damons’ strike hit the side of the net.

A win against City would propel Chiefs into the top eight.

After 21 games, Amakhosi are ninth on the table with 25 points, one behind eighth-placed TS Galaxy, who have played one game more.

Amakhosi are unbeaten in their last eight games, with three wins and five draws in all competitions.

Zuma, who has been in and out of the playing squad due to niggling injuries, expects City to be a tough nut to crack.

Even so, the 25-year-old is still positive they will bag maximum points.

Chiefs' last defeat was 4-0 to Moroccan giants Wydad Casablanca in the Caf Champions League away in February.

“Even when we played them in the first round in Cape Town, they gave us a hard time [Chiefs won 2-1 in January], so I think the game won’t be easy at all.

“But I am positive that we’ll win.

“All the games we play now are must-wins.’’

“Msholozi”, as Zuma is known in football circles, is thrilled to be back in the set-up after shaking off injuries in recent weeks.

The lad from Pietermaritzburg intends to build on his splendid performance in Chiefs’ 2-all draw against Guinean side Horoya in the Caf Champions League in Conakry, the West-African country's capital.

Against Horoya, Zuma came off the bench to set up Khama Billiat to net the second goal, sending Amakhosi to the last eight of the Champions League.

Zuma boasts just three starts in the 12 games he has featured in across the league, the Nedbank Cup and the Champions League.

“At this moment, I don’t have any injury and I am happy about that.

“I am always with the team these days, fighting very hard to regain my full fitness,’’ Zuma said.

“My performance against Horoya gave me new confidence.

“For me, to help the team qualify for the quarterfinals of the Champions League was a big deal.

“I want to carry on like that.’’ —  Additional reporting by Sihle Ndebele