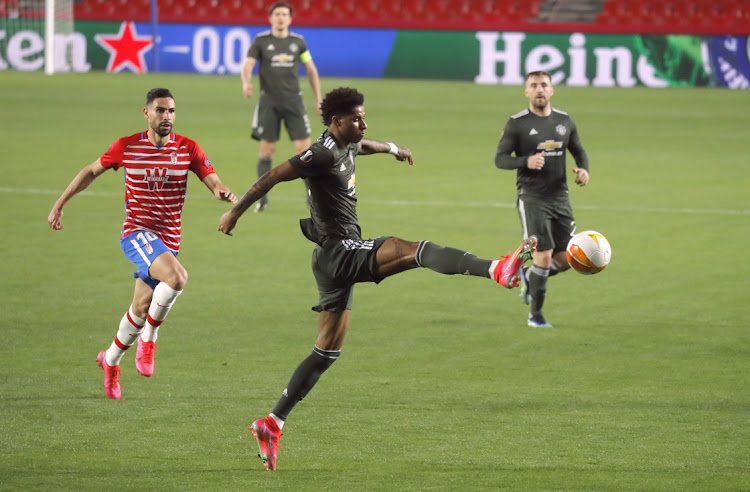 Rashford became the fourth player from an English club to reach 20 goals in all competitions this season - after Mohamed Salah of Liverpool, Tottenham Hotspur's Harry Kane and Fernandes - as he scored with a moment of quality on the half-hour.

Victor Lindelof's long ball was inch-perfect but Rashford's control with his first touch at full speed was sublime, leaving Granada's defence in his wake before netting past Rui Silva.

Fernandes, meanwhile, put away his 19th penalty from his 20 spot kicks for United, which is a remarkable record given that he only joined the club in January last year. Admittedly, this time he was fortunate as Silva got a strong hand to the ball.

"Rashford and Bruno Fernandes have been exceptional, and are so important for us," Solskjaer told BT Sport.

"The first goal is a very good run and fantastic finish by Rashford. Bruno’s so comfortable from the penalty spot - even though the goalkeeper nearly saved it.

"We want to win every game. We’re still a young team, an improving team. We have to develop all the time. We always try to go forward and create chances. We feel good (about our chances of going through in the second leg) at Old Trafford."

United will, however, be without club captain Harry Maguire, fellow defender Luke Shaw and midfielder Scott McTominay for the return leg on Thursday after all three were booked.

"It’s not a perfect night. We’ve got three suspensions for the next game, but 2-0 is a very good result," Solskjaer added.

"We know it’s very difficult to get a result like this in Spain. I’m very happy."

Rashford was also substituted in the second half due to a lingering foot injury, Solskjaer said.

Solskjaer said Rashford was replaced by Uruguay striker Edinson Cavani in the 65th minute as a precaution and that he should be ready for Sunday's trip to face Tottenham Hotspur in the Premier League.

"... his foot is a bit sore, so we didn't want to aggravate that too much," Solskjaer said.

"It is the same thing as before. He has not recovered from it.

"Hopefully it's not gotten any worse from this. He should be ready for Sunday."

The Norwegian said he replaced defender Shaw with Alex Telles at the start of the second half due to a similar reason.

"I had to protect Luke but I think and hope he should be ready for the weekend," Solskjaer said.