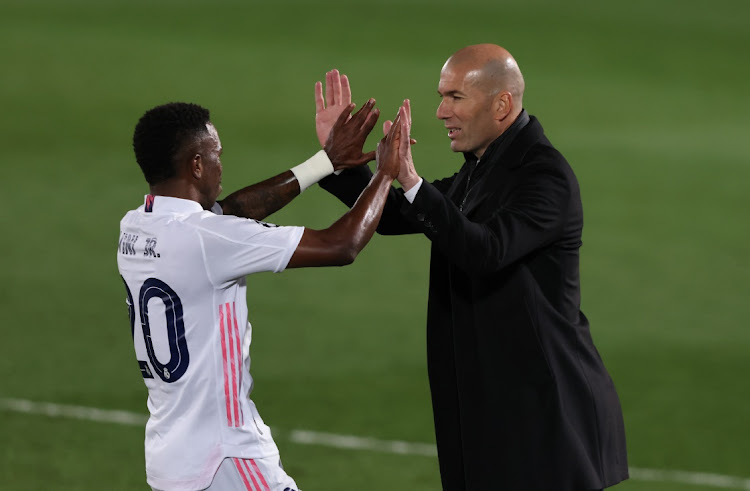 Real Madrid produced their best display of the season in crushing Liverpool 3-1 on Tuesday to move within view of the Champions League semi-finals, staging a remarkable turnaround of the type they have become accustomed to under Zinedine Zidane.

They were missing key players in Eden Hazard, Raphael Varane and Sergio Ramos for the quarter-final first leg but dominated the midfield thanks to their long-running trio of Casemiro, Luka Modric and Toni Kroos, the foundation of their three consecutive Champions League triumphs.

Zidane also got his tactics spot on, exploiting Liverpool's high defensive line with long balls from deep, leading to Kroos finding Vinicius Jr. for the first goal and Marco Asensio for the second, with the help of a botched Trent Alexander-Arnold clearance.

Watching Real beat the Premier League champions so comfortably, it was easy to forget what a chaotic season it has been.

Hampered by the biggest injury crisis in La Liga, they fell 10 points behind leaders Atletico Madrid in January and were in serious danger of exiting the Champions League group stage in November.

"What the players are doing is tremendous after all the difficulties we have had. We've turned the season around," said Zidane.

"The best thing is the team's character. It hasn't been easy for them but this team has no limits. They always want more, they're highly experienced and just want to keep on winning."

They now have genuine belief of winning the two biggest trophies, having cut the gap behind Atletico to three points and gearing up for Saturday's fixture against Barcelona in ferocious form.

They also take a huge advantage with them to Anfield, where Juergen Klopp conceded his side have a far smaller chance of repeating their 2019 turnaround over Barcelona due to the absence of fans.

Real's transformation is all the harder to believe considering it was only two months ago when a frustrated Zidane let rip at the media, urging the media to "Just show us a little bit of respect for what we’ve achieved."

He certainly got that after outclassing Liverpool.

'There can be no argument, a thrilling Madrid rattled a dishevelled Liverpool', added El Pais.