City won't sit back and defend in Dortmund, says Guardiola 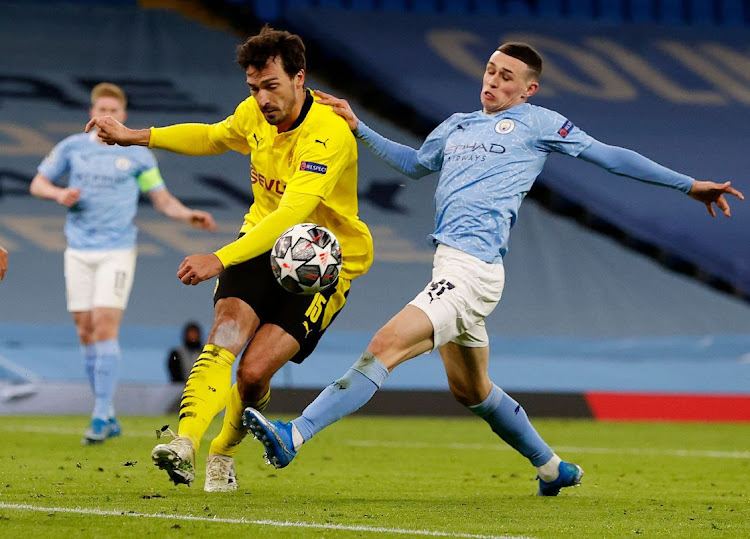 Manchester City manager Pep Guardiola knew their Champions League quarter-final against Borussia Dortmund would be no walk in the park, despite the recent form of both clubs, so he was pleased to come out of Tuesday's first leg with a 2-1 advantage.

City went ahead in the first half through Kevin De Bruyne before Marco Reus scored an 84th minute equaliser, but Phil Foden grabbed a last-minute winner to tip the balance in favour of the Premier League leaders.

Guardiola's side lacked their usual sharpness in the final third but the Spaniard said his team had to deal with a huge burden of expectation thanks to their red-hot form coming into the match and Dortmund's struggles in the Bundesliga.

"When you win 26 games in 27 and they are not winning the Bundesliga, the pressure is on our shoulders," he said.

"Everything is guaranteed for us. Everybody believed we would win.

"We had an incredible commitment and desire to go through."

Dortmund, who host the return leg next Wednesday, have seen their title hopes vanish and now look unlikely to grab a place in the top four, while City are looking to complete a quadruple.

Guardiola said he would look to make some adjustments for the return leg but stressed they would not be going to Germany to sit back and defend.

"I asked the players to win the game. We did it and now we go to Dortmund not to defend," he added. "We'll adjust our pressing, adjust our buildup and play 90 minutes to try and reach the semi-final."

Guardiola hailed the performance of 20-year-old Foden, who looked a real danger towards the end of the contest.

"Phil was brilliant in his aggression in the last 30 minutes, he was our threat," Guardiola said.

"Second half, he played really well, and one against one arriving in the final third, he had two, three chances to score and finally did."

City take on Leeds United in the Premier League on Saturday.

Meanwhile, Dortmund interim coach Edin Terzic has warned Guardiola that their Champions League quarter-final tie is far from over.

"Pep had some nice words for me at full-time, but we’re not done yet. We’ll see each other again in eight days' time," said Terzic. "It’s halftime and the tie is still open.

"We’ll be ready to give it our all to overturn the result and reach the next round. We kept their chances to a minimum and posed a threat ourselves going forward. It was evenly matched so we’re disappointed with the result in the end," he added.

Dortmund skipper Marco Reus was upset with the way his side had allowed City to take an advantage to Germany.

"We’re annoyed. Conceding a second right before the end was unnecessary. Two seconds of us switching off and they showed their quality. We have to stop the cross coming in. On the whole though, I think we produced a great performance," he said.