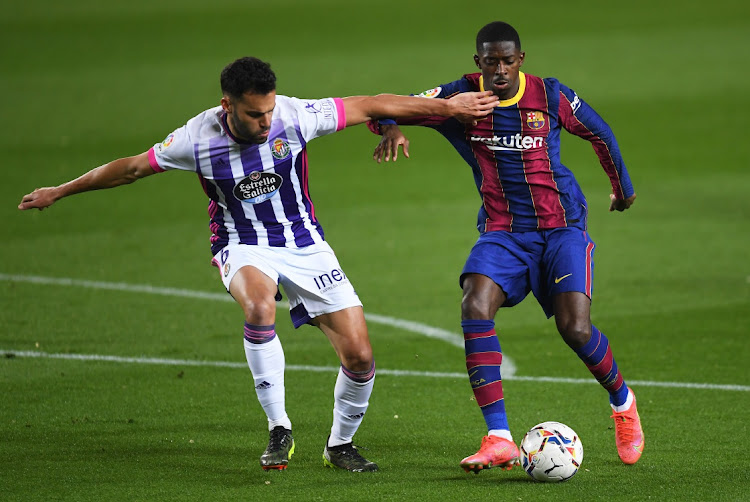 Bruno of Real Valladolid battles for possession with Ousmane Dembele of Barcelona during the La Liga match between at Camp Nou on April 5, 2021 in Barcelona
Image: ALEX CAPARROS / GETTY IMAGES

Barcelona coach Ronald Koeman said his side have what it takes to win their nine remaining games and sweep to the La Liga title after snatching a last-gasp 1-0 win over Real Valladolid on Monday.

The Catalans were far from their best but a volley from Ousmane Dembele in stoppage time meant they grabbed a sixth straight league win and closed the gap with Atletico Madrid to one point with nine games remaining.

"The team is capable of winning the games we have left but today was also a reminder you always have to be at your very best and you have to be clinical," Koeman told reporters.

"We weren't feeling fresh today, maybe because of the international break, but if we get back to how we were before then we're capable of winning all our games."

Barca were given an early let off when visiting forward Kenan Kodro headed against the crossbar while they survived a VAR review on a handball by Jordi Alba in the second half.

Another key decision went their way when Valladolid's Oscar Plano was sent off with 11 minutes remaining.

"We didn't make a great start to the game but we improved in the second half, we changed the system and made some substitutes and were a lot better," Koeman added.

"You have to give credit to the team for their mentality as they were always on the lookout for the three points. It was a very difficult game, we were not at the top of our game but sometimes you have to know how to suffer and in the end we deserved the victory."

Barca visit third-placed Real Madrid next Saturday and whoever wins the 'Clasico' will go top of the table before Atletico visit Real Betis the next day.

Koeman added: "It was so important to win tonight, we're only one point behind Atletico and we're ahead of Madrid. We're at the decisive stage in the title race and it's going to be exciting right until the end."