Shaw back in frame after making most of England recall 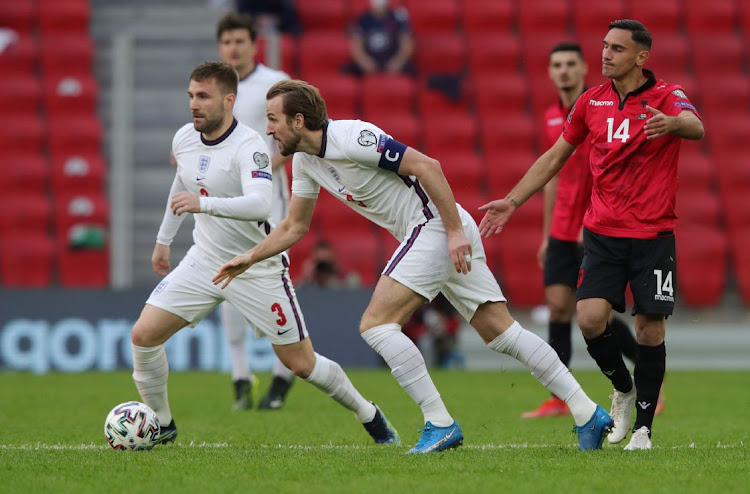 When injuries and poor form threatened to turn Luke Shaw's dream move to Manchester United into confidence-shredding struggle, his career appeared to be in a downward spiral.

On Sunday, however, Shaw was rewarded for a stunning revival at Old Trafford with his first England cap since 2018 and second in four years and seized his chance in impressive fashion.

Providing an attacking thrust down the left, it was Shaw's precise cross in the 38th minute that allowed Harry Kane to open the scoring in a 2-0 defeat of Albania in Tirana.

It was the sort of performance that persuaded United to splash out 30 million pounds to sign him from Southampton in 2014 - a then world record fee for a teenager.

Shaw had already earned three England caps by the time he switched to Old Trafford, since when he managed only five more, before give the nod again on Sunday by Gareth Southgate.

He faces stiff competition for the left back slot from the likes of Chelsea's Ben Chilwell, but Shaw, one of the key components in United's team this season, is back in the frame for selection for this year's European Championship.

"The last two years I have been watching the games and regretting not having taken my chance," Shaw said.

"I am so happy to be back. I would love to be in the Euros squad. There is high competition. I will keep pushing myself."

The immediate priority for Shaw will be keeping the starting berth for Wednesday's home clash with Poland - a match England will start full of confidence after comfortable wins against San Marino and Albania to top World Cup qualifying Group I.

"He was able to come on to the ball a bit more and he made some lovely passes, it was his cross for the goal and he got better as the game went on," Southgate said. "Defensively he was pretty solid today too."

Southgate has a plethora of options for the Poland clash, although the first name on his team sheet will be Kane who notched his first international goal since 2019 on Sunday to move to 33 for his country.

Not far behind will be Chelsea's young midfielder Mason Mount, who scored England's second goal on Sunday.

He is the first Chelsea player to score or assist in three consecutive England appearances since Frank Lampard.

"He is an exceptional player, he finds space intelligently, he creates chances, he scores goals," Southgate said. "I thought his performance was excellent tonight as was Phil (Foden's)."

While England were comfortable, Southgate was slightly critical of the last 20 minutes when his players took their foot off the throttle and offered Albania some hope.

"There is a lot of talk about what we potentially might be but if we want to deliver then we have to have high standards. I was pleased with the win, but I think we can improve.

"I'm pushing for a bit more because I think that's the standard we've got to set if we want to be a really top team."

Mount is the first Chelsea player to score or assist in three consecutive England appearances since Frank Lampard, the 22-year-old's former manager.

"I thought his performance was excellent," Southgate said.

"He is an exceptional player, he finds space intelligently, he manipulates the ball very well, he creates chances and he scores goals."