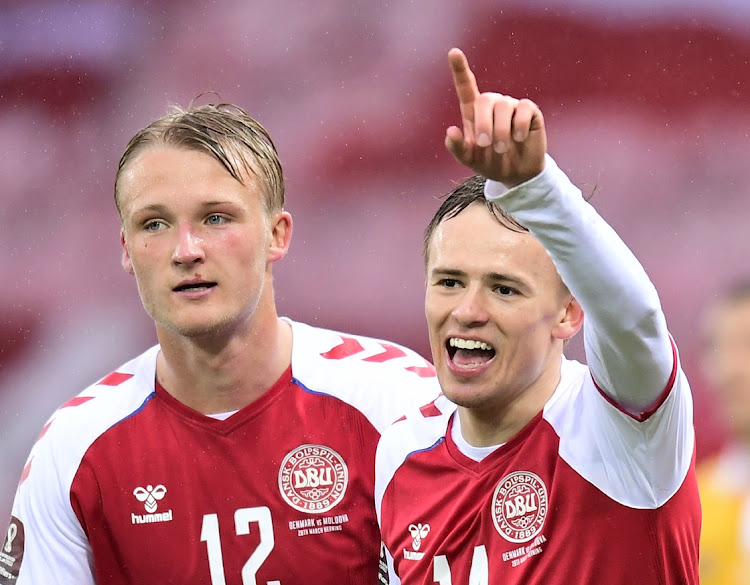 Denmark turned on the style as they thrashed Moldova 8-0 in their World Cup qualifier on Sunday to top Group F with Kasper Dolberg and Mikkel Damsgaard both scoring twice against the nation ranked 177th in the world.

It was the biggest win in a qualifier for a major tournament by Denmark, who wore t-shirts with "Football Supports Change" on the front for their team photograph to raise awareness of human rights issues in Qatar, who host the 2022 World Cup.

Denmark coach Kasper Hjulmand made 10 changes from the side that defeated Israel 2-0 away in their opening qualifier as only goalkeeper Kasper Schmeichel remained in the team, but it made little difference as they quickly dismantled the visitors.

The Danes went ahead in the 19th minute when Moldova midfielder Catalin Carp pulled down Joachim Andersen and Dolberg sent the penalty low to goalkeeper Stanislav Namasco's right.

Three minutes later they were two goals up when some dreadful Moldovan defending allowed Andreas Skov Olsen to cut in from the right and set up Damsgaard to poke the ball home, and the winger netted his second seven minutes later.

Fullback Jens Stryger Larsen added a fourth, cutting in from the right before curling the ball into the net with his left foot and Mattias Jensen made it 5-0 six minutes before the break.

Dolberg headed his second early in the second half before substitutes Robert Skov and Marcus Ingvartsen completed the rout.

Denmark are top on six points, two points ahead of Austria, who came from a goal down to win 3-1 at home to Faroe Islands. Scotland are third on two points after a 1-1 draw in Israel, who now have a point along with the Faroes and bottom side Moldova.

Meanwhile, Italy's Andrea Belotti and Manuel Locatelli secured a 2-0 win over Bulgaria on Sunday to make it two wins from two in Group C at the start of their side's 2022 World Cup qualifying campaign.

Italy struggled to break down the hosts in the first half despite dominating possession but took the lead with a penalty won and converted by Belotti two minutes before the break.

There were few second-half chances but the visitors put the seal on a fifth successive win - without conceding in that run - eight minutes from time thanks to Locatelli's fine finish.

Italy are top and will aim to continue their 100% start on Wednesday when they travel to Lithuania while Bulgaria, who have now lost their first two matches, visit Northern Ireland next.

"There are no easy games," said Italy coach Roberto Mancini. "We always think we can win but knowing there are opponents who get everyone behind the ball we have to be careful. The opponent played to not lose and playing away from home is tough too."