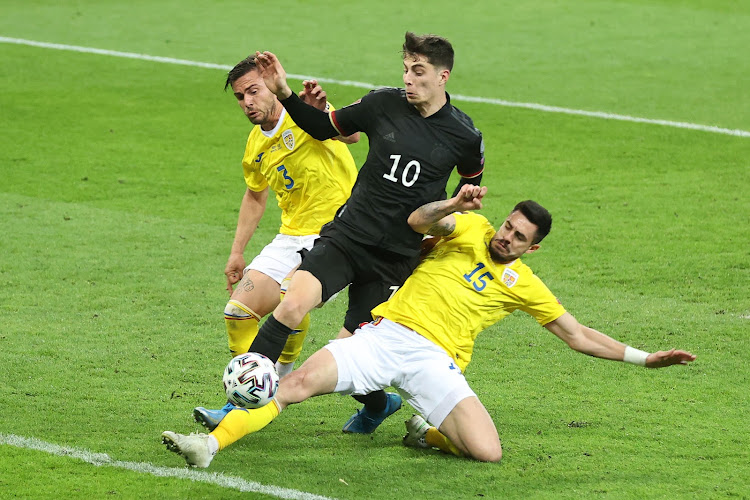 Kai Havertz of Germany is challenged by Alin Tosca and Andrei Burca of Romania during the FIFA World Cup 2022 Qatar qualifying at the National Arena on March 28, 2021 in Bucharest
Image: Alexander Hassenstein/Getty Images

Chelsea's Kai Havertz struggled to adapt to the demands of the Premier League following his arrival from Bayer Leverkusen but the Germany midfielder said he has finally settled down and sees a bright future for himself at Stamford Bridge.

Havertz managed just one goal and two assists in the league since arriving from Leverkusen for a reported 71 million pounds ($97.80 million), according to Premier League stats.

The 21-year-old was laid low by Covid-19 in November and was then used mostly as a substitute by manager Thomas Tuchel before picking up an injury last month.

"It's been a tough season," Havertz said after Germany's 1-0 win over Romania in Sunday's 2022 World Cup qualifier. "I know that things haven't been going smoothly.

"But I think that's normal when you first go abroad. It takes half a year or longer to adjust.

"I think that things are going well right now so I don't want to overthink those negative impressions from the past. I am positive and hope that the next weeks will be every bit as good."

Chelsea are fourth in the league with 51 points and host West Bromwich Albion on Saturday after the international break.

Germany maintained their perfect start in 2022 World Cup qualifying after an early Serge Gnabry goal although they missed a string of chances against the home side.

The result left the Germans top of the group on six points from two games ahead of Armenia on goal difference before their next match at home to North Macedonia on Wednesday.

The Germans also kept a second successive clean sheet after Thursday's 3-0 home win over Iceland but could have been punished for their profligacy as Romania midfielder Nicolae Stanciu missed a 90th-minute sitter.

Germany coach Joachim Loew conceded his team plunged themselves into a tense finish after failing to add to their tally in the second half.

"We worked hard for the ball and had some good moves, but we have to criticise the way we used our chances," he said. "We could have made it a lot easier by scoring the second goal.

"Maybe we did not play enough balls behind their defence. We also could have had more runs behind, and that's something we can improve on."

Gnabry added: "We were through one on one versus the goalkeeper three, four times, but failed to convert.

"The most important thing for us is the three points. We had so many counter-attacks in the second half, but failed to make it 2-0 and made things difficult for ourselves."