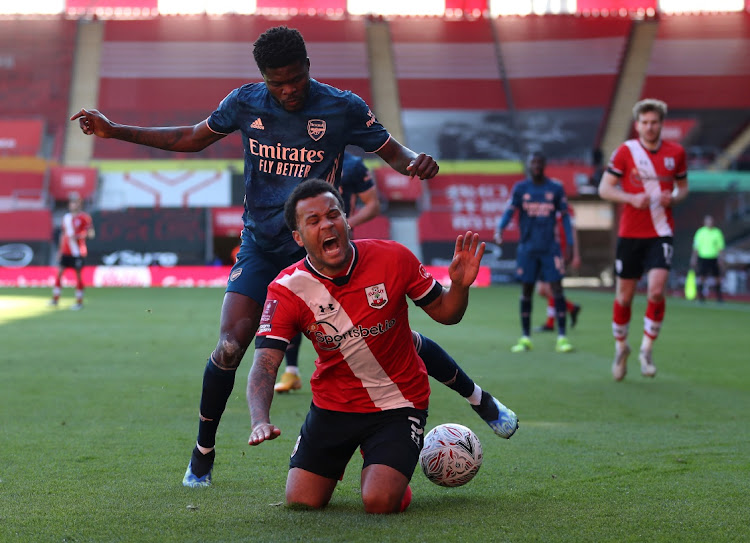 Ryan Bertrand of Southampton is tackled by Thomas Partey of Arsenal during The Emirates FA Cup Fourth Round match between Southampton FC and Arsenal FC on January 23, 2021 in Southampton, England.
Image: Catherine Ivill / Getty Images

Holders Arsenal bowed out of the FA Cup in the fourth round in disappointing fashion as Gabriel's first-half own goal condemned them to a 1-0 defeat by Southampton on Saturday.

Manchester City also looked to be on the brink of defeat at fourth-tier Cheltenham Town but they scored three times in the last 10 minutes to avoid one of the competition's great shocks.

Arsenal claimed a record-extending 14th FA Cup title by beating Chelsea in August but Mikel Arteta's side's defence of the trophy ended with a whimper.

Southampton deservedly took the lead in the 24th minute when Kyle Walker-Peters drilled a low cross into the area and Gabriel inadvertently touched it past keeper Bernd Leno.

Arsenal could have fallen further behind with home striker Danny Ings going close for the hosts on several occasions.

The visitors, who made a raft of changes for the tie on the south coast, did apply some second-half pressure with Rob Holding wasting their best chance but Southampton held on to set up a fifth-round clash with Wolverhampton Wanderers.

It was their first FA Cup win over Arsenal.

“We had in the first half more punch and more power,” Southampton manager Ralph Hasenhuttl said.

“In the second half it's normal they have a lift. We must make the second goal. We made one or two chances — Shane Long should have got a penalty.

“It was a good team performance today.”

Arsenal's first defeat in seven matches was a bitter pill for Arteta to swallow.

“Really sad to be out of the competition. Disappointed to be out and the way we conceded,” the Spaniard said.

When Cheltenham skipper Ben Tozer launched yet another humongous throw-in into the City area just before the hour and in the resulting scramble Alfie May prodded home, raising the prospect of sending Pep Guardiola's side packing.

They held on until the 81st minute when Phil Foden volleyed in an equaliser. When Gabriel Jesus scored again three minutes later, City could breathe easy. Ferran Torres added a late third.

Guardiola will not forget the tie in a hurry though.

“They used their quality in the box, they are taller and better than us there and we showed clips on how to solve it. It is difficult to control that,” he said after his side's 10th successive victory in all competitions.

For Cheltenham manager Michael Duff it was a case of what might have been.

“I'm incredibly proud. The players they brought on from the bench and the way they celebrated the goals tells you something. They know they've been in a game. They've done that to better teams than us,” he said.

City will face Championship high-flyers Swansea City in the fifth round after the Welsh club crushed Nottingham Forest 5-1.

Norwich City lost 1-0 at Barnsley while Bristol City were 3-0 winners away to Millwall.