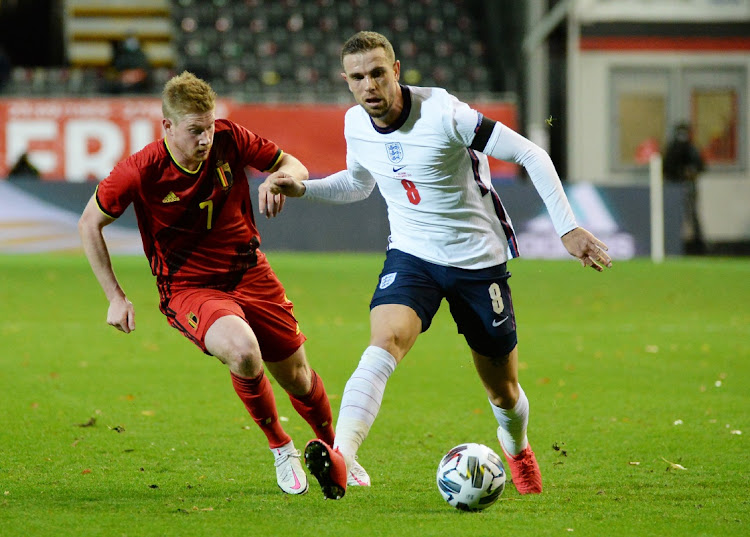 England midfielder Jordan Henderson was withdrawn at halftime against Belgium due to tightness in his leg, manager Gareth Southgate said, casting doubt on his availability for injury-hit Liverpool this weekend.

Harry Winks replaced Henderson in the second half of England's 2-0 loss in their Nations League group stage match on Sunday which ended the visitors' hopes of reaching the finals.

"Jordan had a bit of tightness at halftime and felt he couldn't carry on," Southgate told reporters, adding that he was not sure if it was a hamstring issue.

Southgate said the Liverpool skipper will be assessed when they return to England.

Liverpool have had a number of regulars in their starting lineup sidelined with injury, losing defenders Virgil van Dijk and Joe Gomez after both underwent surgeries while Trent Alexander-Arnold withdrew from the England squad with injury.

The defence is threadbare with left back Andy Robertson also a doubt with a hamstring issue while Liverpool's midfield is without Thiago Alcantara and Alex Oxlade-Chamberlain as both players recover from knee injuries.

Meanwhile, forward Mohamed Salah is set to miss Sunday's match against Leicester City as he isolates after testing positive for Covid-19.

Southgate said Manchester City winger Raheem Sterling would miss their final group stage match against Iceland with a calf injury but would be available for the weekend.

The England boss, 50, also confirmed he had tested positive for Covid-19 last month.

"I did have the virus but I was fortunate," he said. "It was not as serious as so many people in our country. It was not pleasant but it is all fine now."

Southgate said there were many positives to take from defeat in Belgium  that ended his side's hopes of reaching the Nations League finals, none more so than the display of Jack Grealish.

With Sterling out, the Aston Villa playmaker started his first competitive international and was England's stand-out performer.

Playing behind striker Harry Kane in a 3-4-3 formation, Grealish made several trademark runs and looked to be England's most creative player against the top-ranked Belgians.

If Southgate had doubts about the Villa man before, he now knows the 25-year-old can make the step up.

"I thought Jack Grealish had an absolutely outstanding game," Southgate said. "Losing Raheem Sterling and Marcus Rashford, we lose a lot of speed. But I can't fault the attacking play until the last chance.

"We created far more opportunities than we did at Wembley. I saw what I knew I would see from Jack, someone with the bravery to play. He took the ball in tight areas, his technique was good, we knew he would buy a lot of free kicks.

"I thought he was outstanding, he should be delighted. Today was a great game for us to see him in. I couldn't speak highly enough of his performance.

"He played with huge belief and character."

Grealish said he watched videos of Belgium's Kevin De Bruyne in the days leading up to the game.

"The last 24 hours I have been watching clips of my favourite players. I do that every game. I have been buzzing," he said.

"The most difficult thing is trying to get the chemistry with the team mates. When you come here you only have 10 days to build that. It just clicks with some players though."

While Grealish impressed, England's lack of goals in their group (three in five games) is a worry.