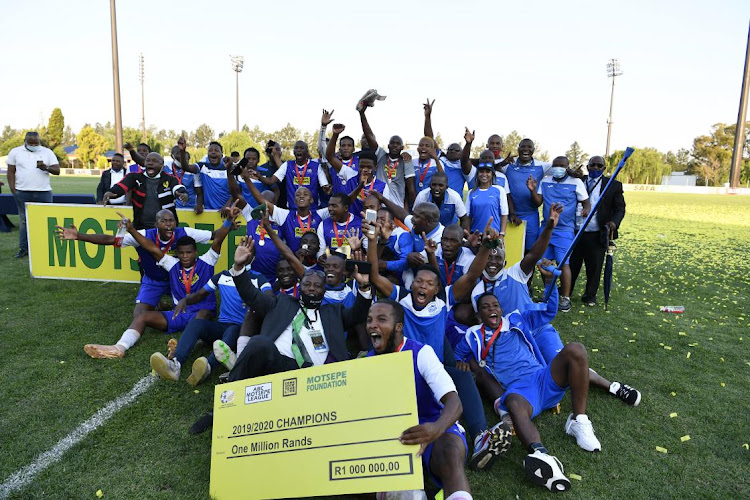 The Eastern Cape’s Bizana Pondo Chiefs were crowned the ABC Motsepe League playoff champions after beating Pretoria Callies on penalties in the final at the Vaal University of Technology on Saturday.

Both teams had already qualified for promotion last Thursday by virtue of them making the playoff final after winning their semifinals.

But there was plenty to play for in the final with Pondo Chiefs earning a cool R1-million and Callies R500,000 for coming second.

Pondo Chiefs took the lead in the second half via an Innocent Ngcobo goal but Malwande Natemba got one back for Callies to make it 1-1 at full time.

The match went straight into penalties and Pondo Chiefs held their nerve to emerge 5-4 winners pf the shoot-out.

The player of the tournament award went to Callies’ Keorabetse Sebone  while Thabiso Nkoana, also of Callies, won the golden boot with his three goals in the playoff stages.

Callies beat Mangaung United 3-1 in the first semifinal while Pondo Chiefs beat Umvoti 4-3 on penalties after the being deadlocked at 0-0 through fulltime as the two teams earned the right to play in the GladAfrica Championship (former National First Division) in the coming season.

When asked whether they had  decided on which stadium to use club chairman Nathi Mqokiyana said: “No, for now we don’t know. Right now we just want to enjoy the moment and maybe on Monday we will discuss what options we have.”