SA’s Cosafa win the fourth in a row 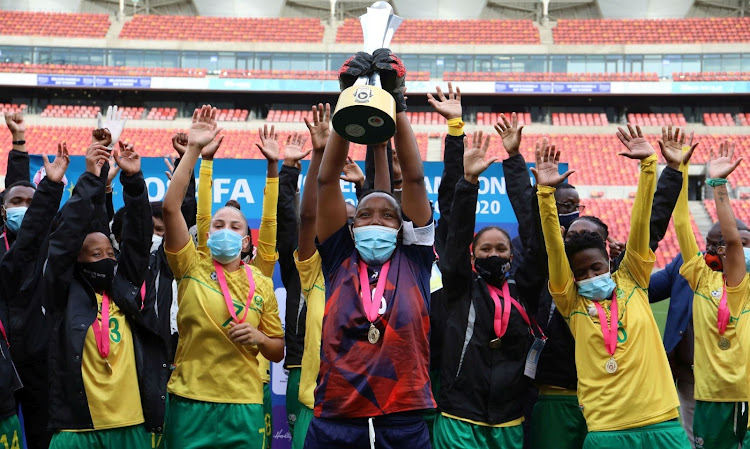 Banyana  Banyana coach Desiree Ellis said being crowned the winners of  the Cosafa Women’s Championship trophy on Saturday was a moment her young players would never forget.

The SA national women’s soccer side clinched a historic fourth consecutive Cosafa Women’s Championship title by beating Botswana 2-1 in the final at the Nelson Mandela Bay Stadium on Saturday.

Goals from Sibulele Holweni and Gabriela Salgado saw Banyana claim their seventh Cosafa Women’s Championship title and the fourth in a row, which is a record.

The win also saw the SA women’s team go unbeaten in the competition.

There were not as many familiar faces in this year’s Banyana squad as in previous years, with only six players returning from the 2019 combination.

However, the young players Ellis picked proved their worth and continued from where the senior players left off.

“I think, if I look back at all the Cosafas since 2017, we had 10 new players back then who got their first medals,” Ellis said.

“I say to the players all the time ‘go out and make your mark. Go out and be remembered, go out and raise your hand’, and now we have a headache (with player selection) but we have a good headache because it has made our core group bigger.

“The celebration for the players, I think it will go on and on because I think this is something  that you will never forget.

“I mean, this is an opportunity that you dream of, playing for the national team, and now you have not only played but you have a gold medal.

“I think if they really look back at what they have achieved, it’s a moment to remember. We had 25 days in our training camp to prepare after being out for seven months.

“I have to applaud the players, they are the key role players here.”

Ellis said her players had put in the work and they were pushed by the fitness trainer along with the technical team.

“We have really worked hard. The analyst was spot-on with all the games.

“We stuck to the game plan half and half  in the final, but when we did move the ball around we created a lot of opportunities. The assistant coach was fantastic, I can mention each and every one from our support group because we are a team.”