England ease to first win over Ireland since 1985 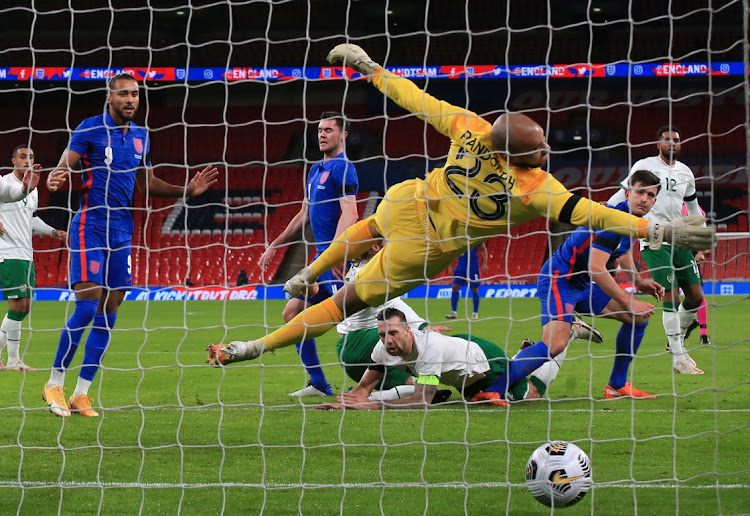 England beat Ireland for the first time since 1985 as goals by Harry Maguire, Jadon Sancho and Dominic Calvert-Lewin secured a 3-0 win in a friendly at an empty Wembley Stadium on Thursday.

Maguire, wearing the captain's armband, headed his side in front after 18 minutes and Sancho's fine finish put the hosts in cruise control before halftime.

England created numerous chances but Calvert-Lewin's penalty was the only addition to the score as the hosts impressed ahead of Nations League clashes against Belgium and Iceland.

It was quite a turnaround for Maguire who was sent off in England's last game, a 1-0 Nations League defeat by Denmark.

England's performance was also a welcome distraction after a difficult week in which Liverpool defender Joe Gomez suffered a serious knee injury in training with the national team and FA chairman Greg Clarke resigned after making inappropriate comments at a parliamentary committee meeting.

Remarkably, England's last six completed matches against Ireland had ended in draws with the game in Dublin in 1995 abandoned because of crowd trouble.

“We used the ball very well, created a lot of chances. We could have been more comfortable if we had taken some of those chances but overall very pleased,” Southgate said.

An added bonus was a debut for 17-year-old Borussia Dortmund midfielder Jude Bellingham who came on in the second half to become the third youngest player to represent England, behind Theo Walcott and Wayne Rooney.

Ireland, who were drafted in to replace New Zealand as England's opponents, enjoyed a decent opening 10 minutes but after that were outclassed.

Aston Villa's in-form playmaker Jack Grealish was given a start by Southgate and he produced a fine display.

With Harry Kane among the substitutes, Maguire was handed the armband and the Manchester United defender enjoyed a quiet night in defence while showing his threat at the other end.

His header from a Harry Winks cross sent England on their way and Grealish combined with Sancho for the latter to jink past Jeff Hendrick and fire low past Darren Randolph.

After 56 minutes Arsenal's Bukayo Saka was brought down in the box and Calvert-Lewin sent his spot-kick high into the net.