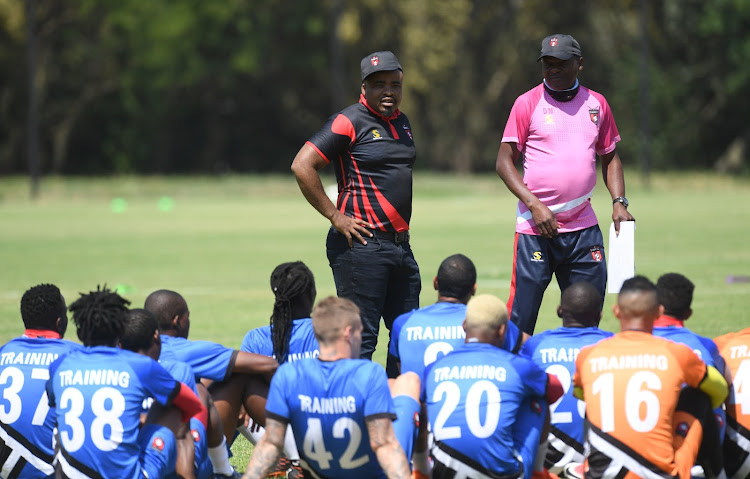 The DStv Premiership newcomers began their campaign in the topflight with a win and two draws‚ ensuring that they went into the Fifa break sitting at seventh place on the standings with five points.

In addition to those two clean sheets‚ they conceded only one goal and a delighted Malesela said they owe their impressive defensive performance to their organisational structure.

“Yes‚ I am happy that we haven’t conceded in the last two games but it is not only that‚” he said.

“The fact that we were not seriously threatened is a plus for the team. Sometimes you survive in matches and I’m not the one to make excuses.

"If we were outplayed‚ I’ll be the first one to admit that we didn’t play well and didn’t defend well.

"The fact that we were not seriously threatened says a lot about our defending and our organisation‚ and one is pleased about that.”

Malesela said that the Fifa break came at a wrong time for his team as some players who are not on international duty may switch off because of a lack of competitive action.

“I was speaking with players about this period‚ it is very crucial mentally because somehow players tend to relax.

"Psychologically it is not okay.

"We need to be careful of how we express ourselves and we have to put in a lot of effort at training.

"The mind switches off and says‚' no we don’t have any matches and we want to restart when the matches come up' and it is a very dangerous thing.

“I spoke with the players about the psychological effects of this period so that we don’t relax heading in to the next game against Swallows.

"We need to have our minds set on the next task ahead.

"We’ve only played three games and we can’t afford to relax because we have a Fifa break. We need to be very careful and see how we handle ourselves‚ and what we do at training.”

Malesela said he is satisfied with the way they have started the season but they need to work on their finishing as they have managed to only score two goals in three matches.

“You don’t want to be selfish and unreasonable as well‚ we’ve played good teams.

"One would have wished that we got maximum points in all those games particularly the last game against Chiefs.

"We created chances but we didn’t use them. I wish we could have taken them but at the same time you can’t be selfish and say whatever.

“One can see that all is not lost. There is hope going forward that we can do better. In all the games that we’ve played‚ we’ve created goal scoring chances.

"If we didn’t create scoring chances‚ then I would be complaining. We created chances and we managed to concede one goal against us.

"We need to work on converting our chances into goals. But you can see that we can do better next time.”